A task that is getting easier and easier each year for General Manager Rick Hahn and Manager Ricky Renteria is setting the Opening Day Roster. Rebuild hurlers like Dylan Covey and Odrisamer Despaigne are gone along with ‘AAAA’ position players such as Charlie Tilson and Ryan Cordell.

Above is the list of players that were invited to 2020 Chicago White Sox Summer Camp at Guaranteed Rate Field. 3 of our fellow Diamond Digest Chicago White Sox writers – Jordan Miller, Conor Eagan, and Andrew Horwath – took a stab at predicting how the 2020 roster will shake out for the season.

Starting with the pitching staff, Michael Kopech and Carlos Rodon will make the 30 man roster as both should be ready to go after their respective Tommy John surgeries and will have shots to start. Ultimately, I’d expect Dylan Cease, Reynaldo Lopez, and Gio Gonzalez will get the first crack at the middle and end of the starting rotation. For the bullpen, Jose Ruiz and Carson Fulmer should round out the pen as Fulmer is out of minor league options, and considering Ruiz’s struggles in 2019, both will be on short leashes as the 28 and 26 man roster cuts draw near.

For the infielders, Cheslor Cuthbert and Danny Mendick project to be in a second baseman placeholder battle while 2018 1st Rd draft pick Nick Madrigal sits with the ‘taxi squad’ for a week to gain an extra year of control. The service time game has been something the White Sox organization has utilized with their top prospects, and I expect with Madrigal they would stick to do this even in a short 60 game sprint given the depth at the 2B position.

Defense will be crucial in the outfield corners surrounding the highly-touted Center fielder Luis Robert, as Eloy Jimenez and Nomar Mazara don’t have the best defensive skills. Expect Adam Engel and Nicky Delmonico to help platoon the outfield when the trio needs time off here and there or for late inning situations.

Zack Collins should get the 3rd catcher spot over the powerful Yermin Mercedes to add another lefty bat in the mix along with the familiarity he has with fellow Miami Hurricane Yasmani Grandal who will mentor him. Having veteran presence around Collins in Grandal and James McCann will continue to be crucial in his development.

After 2 weeks teams will have to crunch the roster down to 28 players, and I would assume the Sox would call up Madrigal after the first week for Cuthbert since the extra year of service time would be then acquired. Collins will move down with the ‘taxi squad’ as McCann is projected to get the majority of the backup catching duty. Then I would have to guess struggles will continue for both Ruiz and Fulmer as they will be sent down to the ‘taxi squad’. To take their place, I would guess the final piece of the Adam Eaton trade – Dane Dunning – would get a major league call up to get some big league action at some point after sitting out 2019 to undergo Tommy John Surgery.

To round out the roster cuts after 4 weeks, teams must cut the roster down to 26 players to complete the rest of the season. I believe that Nicky Delmonico and Danny Mendick will be sent down to the ‘taxi squad’ to finish the season. Expect Madrigal at this point to have a good handle on major-league pitching and Engel is well know for his defense and speed which will be helpful down the stretch. 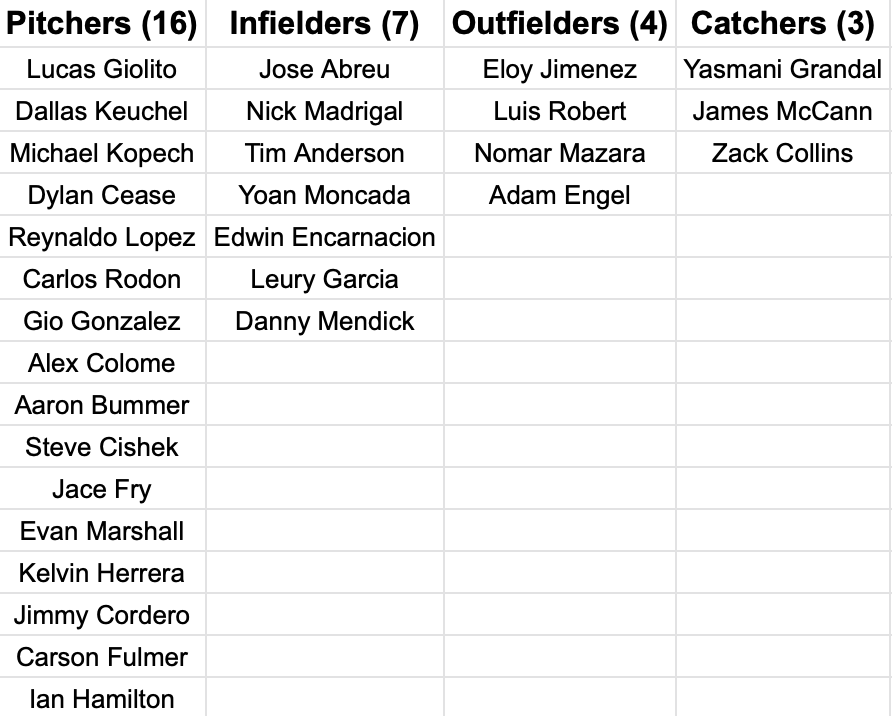 In the infield, Danny Mendick should get a chance to play for a spot after having a successful last month with the team. I ultimately believe that Zack Collins gets the nod over Yermin Mercedes due to Collins’ age and future with the team. James McCann will get time at catcher when Grandal needs rest and time at DH. One of the biggest questions regarding the infield is whether or not Nick Madrigal will start the season with the team or with the ‘taxi squad.’ While he would only need to be on the taxi squad for 7 days, Rick Hahn and Co. realize that every game counts in this short season and we could see him there on Opening Day.

I believe that Giolito-Keuchel-Kopech are locked in for the rotation, with Dylan Cease and Reynaldo Lopez rounding it out. I believe Cease should get a chance for a spot coming off his rookie year, and Lopez deserves a shot at recovering from his underwhelming 2019 season. I could see Rodon in a Andrew Miller-esque role in the bullpen, or as a starter if they decide to go with a 6-man rotation. However, if Lopez struggles. Rodon will probably have to be eased into a starting role, due to coming off of Tommy John Surgery.

When two weeks pass in the season, I believe that Ian Hamilton and Zack Collins will be two of the players sent to the ‘taxi squad.’ As the season continues and pitchers start to get back to 100%, you could see a cut in this department. Zack Collins could be the other odd-man-out, as James McCann looks to hold most of the time as the backup catcher.

When another two weeks pass, two more players will be sent to the ‘taxi squad,’ and I think it could be Danny Mendick and Carson Fulmer. With Leury Garcia able to play infield, Mendick’s usage could be cut. Carson Fulmer has struggled throughout his time in Chicago, and he could be the weakest link when the time comes to cut the roster down. 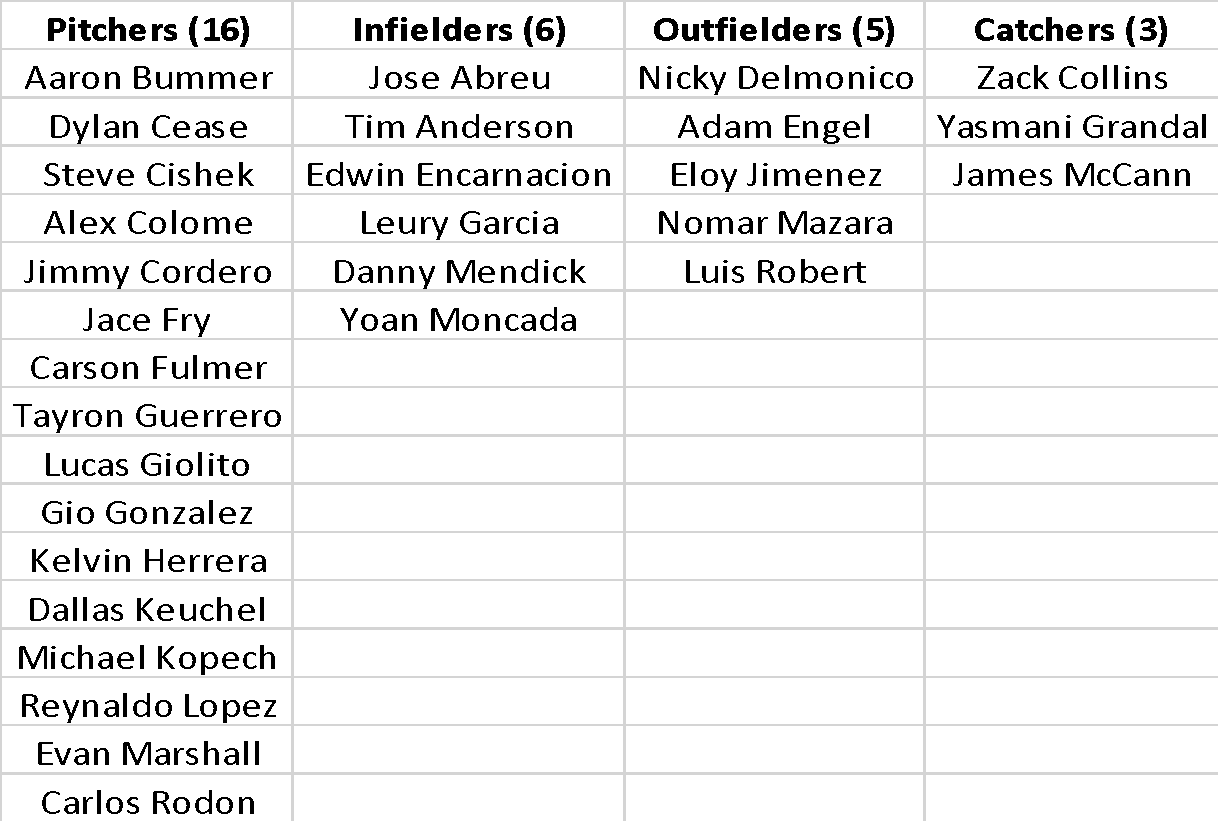 The starting rotation will most likely feature ace Lucas Giolito, southpaws Dallas Keuchel and Gio Gonzalez, and young righties Dylan Cease and Reynaldo Lopez. Two notable names left out will be Michael Kopech and Carlos Rodon, both of whom are coming off Tommy John surgery. I think it is best to deploy both men from the bullpen to limit their innings and ease them back into the pitching staff. The bullpen has multiple locks such as Alex Colome, Aaron Bummer, Steve Cishek, Evan Marshall, Jace Fry, and Kelvin Herrera. Jimmy Cordero impressed in 36 innings of work last season and should grab a spot. Carson Fulmer is out of options and has elite spin rates, so he should be included on the roster. That leaves one spot left, which could go to Jose Ruiz, who has been up and down with the big league team the past few seasons. It could also go to youngsters Codi Heuer or Tyler Johnson. But, I’m going to go with Tayron Guerrero who is owner of the 6th fastest pitch in all of baseball (his two-seam fastball averaged 99.1 mph in 2019 according to Statcast).

Position player wise, the team is close to set around the diamond with the disputes mainly coming from backups. Zack Collins should get the 3rd catcher spot over Yermin Mercedes because of the investment the White Sox have made in the former 1st round pick. Mercedes would be old for a rookie at 27 and could be a good trade candidate.

What might anger some White Sox fans is that Nick Madrigal is not included in my 30 man roster prediction. He only needs to stay on the 30 man taxi squad for 7 days this season in order for the team to gain an extra year of control. Obviously, fans, players, and teams argue about this all the time but I’m not sure Madrigal or really any player would impact a team that much in 7 games.

The last few additions to round out the roster would be Adam Engel, who is the perfect backup outfielder because of his defense and speed. Lastly, fan favorite Nicky Delmonico should get another shot on the team after revamping his swing and crushing the ball during Spring Training.

On day 15 of the season, Major League teams will have to cut their roster down to 28 men. It is pretty difficult to predict who might get sent down mainly due to injuries and even the virus. I’ll take a crack at it and say Delmonico, Guerrero and Mendick will all be sent down. Delmonico acts as a 5th outfielder on the 30 man team and Guerrero is the last option out of the bullpen. Yes, I picked 3 men to get sent down although only 2 need to be, because Nick Madrigal will be called up after the 7 days to finally make his Major League debut.

Then after 4 weeks, the teams will have to cut two additional players, and Zack Collins and Jimmy Cordero could wind up being the two. There just isn’t any playing time for Zack Collins on this roster because he slots in at #3 on the depth chart at all 3 positions he plays: catcher, 1st base, and designated hitter. While Carson Fulmer might make more sense than Cordero, the fact Carson is out of options makes me lean toward Cordero.

It will be interesting to see how the actual 30-Man roster for the Sox will pan out. Perhaps these 3 perspectives will strike up some debate throughout the ‘twittersphere’ as the season draws near. Excitement continues to build on the South Side, unfortunately without fans to join in most likely for the season due to the COVID-19 pandemic. The fan base will watch from home and will hopefully be rewarded with a playoff berth in 2020 which will be the first for the pale hose in 12 seasons.