A look at the Dodgers next great pitching prospect

“They bought it. Incredible, one of the worst performances of my career and they never doubted it for a second.” This is a quote from the scene in Ferris Bueller’s Day off right after his parents leave, believing he’s in fact ill. In my eyes, this quote accurately depicts Walker Buehler’s time with the Dodgers last year, plus, I just couldn’t resist making a corny connection to the movie!

For those unaware, Walker Buehler is a 23 year old pitcher who was picked 24th overall in the 2015 draft out of Vanderbilt University. He underwent Tommy John surgery in August of that year and returned to the mound on August 23, 2016.

In his first full season of professional baseball, Buehler ascended through the minor leagues, beginning in High A and finishing at Oklahoma City (AAA) before his September call up to the Dodgers. He has turned himself into one of, if not, the top pitching prospect in all of baseball.

Below are some of his 2017 minor league stats according to Fangraphs:

Buehler’s ability to miss bats and locate his fastball were the the main reasons he was able to have success and continue to receive promotions in 2017. Now I want to take a look at his small sample of stats from his month spent with the big league squad, along with his major league projections for the 2018 season.

2017 MLB Stats according to Fangraphs:

These projections suggest a lot to be excited about if you’re a Dodgers fan. Manager Dave Roberts has already said Buehler will work as a starter this season, after finishing last season in the bullpen with the Dodgers. He most likely won’t begin the season in Los Angeles, but there’s plenty of reason for optimism moving into this season.

During the 2017 season, Walker Buehler’s fastball had an average velocity of 98.43 mph according to Major League Baseball’s Statcast. According to Fangraphs, he threw his fastball 69.89% of the time. Clayton Kershaw for comparison, threw his fastball 72.00% of the time with an average velocity of 93.9 mph in his first season. Now I’m not saying Buehler is the next Kershaw, but it was just an interesting comparison.

Entering 2018, Buehler could already have one of the most elite fastball/curveball combos in all of baseball. In 2017, he threw his curveball 22.9% of the time at an average velocity of 83.5 mph. That’s an incredible 15 mph drop off from his fastball. This has allowed him to have a high ground ball percentage to go along with ridiculous strike out numbers. Any baseball fan will tell you, that’s a recipe for great success.

Look, pitching is about so much more than just throwing the ball hard and making it spin, but the guy has all the tools to be an elite starter. I’d like to see further development on his changeup and slider, but that will come with time. Buehler should study Nationals Pitcher Stephen Strasburg in that regard, as Strasburg posseses one of the deadliest changeups in all of baseball. For now though, with one of the best curveballs in the game, to go along with the 98 mph gas, many factors should allow Buehler to have better results in 2018.

Heading into the season, Buehler will be given the chance to compete for a back end rotation spot, but it’s highly likely that he begins the season with Oklahoma City due to the plethora of pitching assets the Dodgers have. That said, I expect him to join the rotation sometime later this summer. The injury history of the current starters could play a pivotal role in his MLB playing time, along with the talent that Buehler possesses. Come October, the best pitchers are going to pitch, and I wouldn’t be surprised to see Buehler slotted in that fourth starting role by then.

Now back to my quote. The baseball world only got a small glimpse of Walker Buehler in 2017. What it got, was lackluster performance upon arrival to the Major Leagues. For the first time, hitters didn’t seem overwhelmed by Buehler and he did not adjust to what he was given. In short, it was, in my eyes, one of his worst stretch of performances as a professional. He walked significantly more guys in the show than his statistical averages, and worked passively against hitters at times. With that said, I’m still buying all the Walker Buehler stock I can. We’ve seen him hit 100 on the gun, make hitters look foolish on the knee buckling curveball, and dominate at times. Now it’s time to see it all come together in 2018 and see just what this kid can do

…hopefully he can pitch better than I can connect this piece to the movie. 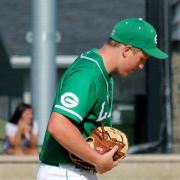 Check Also
Close
About Jeremy May