The Brewers’ 2018 season ended in heartbreaking fashion following a Game Seven loss in the NLCS against the Dodgers just recently. Despite the heartbreak, it showed the bright future and forward-thinking front office throughout the series. With just three impending free agents, all of whom were low-profile acquisitions or had high-priced mutual options (pitchers Gio Gonzalez, Wade Miley, and Joakim Soria, as well as third baseman Mike Moustakas and outfielder Curtis Granderson), the Brewers are in a terrific spot to be World Series contenders in the near term. So what is it that they must do to push the team over the top?

Consistency in the Rotation

This may seem a bit surprising, since the Brewers just fell one win short of a World Series berth riding the heels of a rotation primarily comprised of Jhoulys Chacin, Wade Miley, and Gio Gonzalez, but for the Brewers to become a legitimate World Series team, there must be consistency in the rotation. While the rotation was arguably the weakness of the team in 2018, there is plenty of optimism heading into 2019 for the starting rotation. Rotation anchor and innings eater Jhoulys Chacin will return for the second year and final year of his contract, and the rest will be built around him. Young postseason standout relievers Corbin Burnes and Brandon Woodruff, as well as Freddy Peralta figure to enter their names into the conversation. Rehabbing ace Jimmy Nelson (3.49 ERA, 3.05 FIP, 4.8 fWAR in 2017) will likely claim one of the spots. Also re-entering the picture are veterans Zach Davies and Chase Anderson. Davies is just a year removed from posting back to back seasons of 2.6 and 2.7 fWAR, respectively; and Anderson a year removed from finishing sixth among all starting pitchers (minimum 100 IP) in ERA (2.74). The Brewers boast not only a remarkable bullpen, but also figure to possess one of the better starting staffs in baseball for this year and for years to come, as each of the following are under team control for at least two years, with the exception of Jhoulys Chacin. While a consistent bullpen may anchor them through the Postseason, it will be the starting rotation that will get them there.

Offensive Production from Catcher and the Middle Infield

Combining the facts that the offense headed by presumed NL MVP Christian Yelich and table setter Lorenzo Cain, and that Miller Park is one of the most hitter friendly ballparks in the Major Leagues, scoring runs does not seem to be the troubles for a terrific Brewers ballclub. While their bats are not as poor as it was during the NLCS, the lineup is filled with holes. Two positions specifically of note that lacked offensive production throughout 2018 were catcher and shortstop. The catching corps was primarily composed of Minor League journeymen Manny Piña and Erik Kratz. While they did adequately compared to expectations, they left much to be desired at the plate. Overall, Brewers catchers combined to put up a slash line of .238/.294/.363, good for a 75 wRC+. Possible options the Brewers could pursue would be Yasmani Grandal or Wilson Ramos through free agency or JT Realmuto. Realmuto would be acquired via the trade market, something that I do not envision them doing, especially for a player of Realmuto’s caliber. They may choose to stick with their current options which would be a big mistake, unless Grandal and Ramos sign deals far out of the Crew’s price range.

As far as the Brew Crew’s middle infield goes, things are far from set. In 2018, second base was a revolving door which saw Jonathan Villar, Eric Sogard, Nate Orf, Hernan Perez, Travis Shaw, and Jonathan Schoop all get time at the keystone. Moving over to the left side of the infield, playing time was primarily split by Orlando Arcia, Tyler Saladino, and Brad Miller, none of which recorded better than 0.2 fWAR. As far as second base goes, there are many decisions to be made, none of which are more crucial than what to do with midseason acquisition Jonathan Schoop. Schoop put up a season in 2017 in which he was selected to his first Midsummer Classic, and followed it up with a pitiful showing, his hitting actually worsening after his trade to Milwaukee. Heading into his final season of arbitration eligibility, Schoop figures to be in for a payday of around $10 MM, a cost the Brewers certainly should not pay. Another important decision to be made is whether or not to re-sign third baseman Mike Moustakas. Should Moustakas re-sign, this would likely shift over Travis Shaw to second base for the majority of the time. Should Moustakas go elsewhere, Shaw will most likely see time almost exclusively at third base. If both Schoop and Moustakas depart this offseason, second base figures to be a competition between Mauricio Dubon and top prospect Keston Hiura, although Hiura figures to be more of a factor as the season progresses. As far as shortstop goes, Arcia figures to be handed that spot in the lineup once more, barring a surprise outside move, something GM David Stearns has pulled off numerous times in his tenure as Brewers’ general manager. The upcoming 2019 campaign figures to be a big year for Arcia, as he tries to prove that he is more like his 2017 self (86 wRC+) than his 2018 self (54 wRC+). Should he struggle, they could plug in Dubon at shortstop, or look to acquire outside help midseason. The Brewers have many options heading into the 2019 season up the middle in the infield, and not so many options at catcher, yet each is a major key to the success of the 2019 club next year, and into the future.

Continued Development on the Farm

This may seem like something that could be said for nearly any organization, but this is especially important for the Brewers. Interestingly enough, the 2018 Brewers’ postseason roster was comprised of just five homegrown players (Corbin Burnes, Orlando Arcia, and Ryan Braun, plus homegrown yet traded and since returned players Jeremy Jeffress and Lorenzo Cain). While they may have gotten within one game of the World Series with a team comprised of just a meager amount of homegrown players, they will not sustainably stay that way. Being a small market team with limited resources, it is a must for the Brewers to continue to develop homegrown talent. Some names to watch that may impact the Big League club in the near future are infielders Keston Hiura, Lucas Erceg, and Mauricio Dubon, outfielder Corey Ray, and pitcher Zack Brown. While the 2018 Brewers were built on outside acquisitions, the future versions may be built on homegrown talent.

With the Brewers at the brink of the World Series in 2018, it seems foolish to believe anything else should be the case in the next few years. The Milwaukee Brewers are legitimate World Series contenders, as odd and unusual that is said as they have made just one World Series berth throughout the entirety of the franchise’s fifty years of existence. In conclusion, it is not hard to envision the Brewers winning their first World Series championship in franchise history in the next three years, especially if they can shore up their pitching and their holes in the lineup. 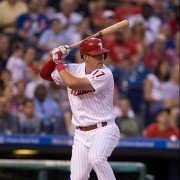