Back when the Mets were good, you probably heard the Legend of Wilmer Flores. Although only an above average player, he became something of a folk hero after nearly getting traded in 2015, and openly crying on the field when he thought he was playing his final game with the only organization he had ever known. Flores’ open display of emotion was refreshing; rarely do we get to see ballplayers be so vulnerable. I know what you’re thinking: “What a NERD! What kind of LOSER cries in FRONT of so many PEOPLE?” I agree with you – crying should be done exclusively when mourning a loved one, when looking at a lawn that you just mowed to perfection, or when watching the 2017 film “Coco.” But whatever you want to say about Flores and his unusual claim to fame, things seemed to work out for him. The trade fell through, and Flores was able to remain with the Mets as they proceeded to lose the World Series, fall into turmoil in the following seasons, and hire an agent as their general manager that cut ties with the young infielder so he could continue to accumulate a roster filled with his former clients. Despite this disappointing turn of events that ultimately resulted in the end of his time in New York, Wilmer Flores should now be crying for a very different reason: he can’t hit lefties anymore.

I bring this up because hitting left-handed pitching used to be the only thing that Flores could really do. Neither particularly fast nor adept in the field, the Mets could always count on Wilmer to put up appealing platoon splits. Flores just signed a one year deal with the Diamondbacks for $4.25 million with a club option for $6 million in 2020, and Arizona figures to use him at multiple positions around the infield, allowing them to rest third baseman Jake Lamb, second baseman Ketel Marte, or, alternatively, to slide Marte into centerfield so that fans aren’t subjected to watching Jarrod Dyson and his 47 wRC+ try to hit baseballs on a regular basis. (They’re Diamondbacks fans. They’ve already been through enough.) Marte is a switch hitter, while Lamb and Dyson both bat left-handed, so Flores’ ability to hit lefties appears to be a compelling case for the Diamondbacks to bring him on in a utility-platoon role.

Except, in 2018, Flores saw his production against lefties, as they say, fall off a cliff. Once it hit the ground, it was mauled by a bear, driven over by a school bus, and left for the rats of New York to feast on. Here are his numbers against left-handed pitchers since 2015:

That’s a tough look for our good friend Wilmer. While his walks were up, and his strikeouts were down in 2018, the real issue was with his contact. When he hit the ball, not much happened. Flores had a single, lonely home run against left-handed pitching in 2018 after hitting 25 the last three years, and his barrel percentage (2.8%) and isolated power (.150) both marked his lowest totals since 2015. 2015 wasn’t a particularly good year outside of one area where he excelled. That was, you guessed it, against left-handed pitchers.

Flores simply wasn’t hitting the ball with any authority. From 2015-2017, he ranked 82nd in hard contact against lefties among 207 players with at least 300 cumulative plate appearances during that span. That’s a pretty respectable number, dead even with reigning AL-MVP Mookie Betts. But in 2018, Flores ranked 192nd out of 247 players with at least 100 plate appearances, behind superstars such as David Fletcher, Scott Selleck, and Mitch Garver. I’m so confident that you have no clue who those players are that I completely made one of them up. That’s how bad Wilmer Flores was against left-handed pitchers in 2018.

So what happened? Flores went from a player with a reputation as a lefty masher to one without much reason to be on a roster and arthritis in both knees. First, let’s examine Flores’ improved walk rate and decreased strikeout rate. This should rightly lead you to believe that Flores was making more contact and swinging less. He posted careers low in swing percentage (47.6%) and swinging strike percentage (5.7%), as well as a career high in contact percentage (87.9%). Whether due to an actually improved batting eye or a mere reluctance to swing, Flores was much more patient in 2018. However, counterintuitively, that improved patience didn’t lead to better pitch selection for Flores:

In the strike zone, Flores’ swing rate decreased in nearly every location. However, his out of zone swing percentage did not decrease at the same rate. You’ll notice he chased more pitches up and away and inside. When Flores was crushing left-handed pitchers the previous seasons, he was aggressive in the zone. In 2018, Flores was far more passive, and when he did decide to swing, the quality of the pitch was often worse. Ted Williams’ first rule of hitting was, “Get a good ball to hit.” Wilmer Flores is not doing that.

But his suboptimal pitch selection doesn’t tell the whole story. (When does it ever? There are 16 books and a television adaptation of “If You Give A Mouse A Cookie,” a story that can be summed up as, “If you give a mouse a cookie, he and his animal brethren will never let you have another meal by yourself in your life, and you’ll be forced to live a life on the run.”) Flores changed aspects of his stance and swing in 2018 that made it more difficult for him to drive pitches. Here is Flores waiting on a pitch in 2016:

Notice where Flores’ hands are: the top of his top hand is about even with his ear flap, while the bottom of his bottom hand is even with the patch on his shoulder. This offers a good base point for Flores to launch the rest of his swing. He ended up hitting that pitch into the left field bleachers, just as he did to this pitch in 2017:

If you thought those were the exact same photo at first glance, you’d only be half wrong. Flores had essentially an identical stance in 2016 as he did to 2017. His hands remain close to his body, and above his shoulders. Flores made this adjustment after struggling in 2015 (against everyone who wasn’t left-handed) when his arms were much more extended. That tweak appeared to pay off greatly for Flores, as 2016 and 2017 saw him post the best batting lines of his career. However, look at this image of Flores’ stance in 2018:

The first thing you should notice is the helmet flap he added. Flores is trying to be safe, and that’s important. The second thing you should notice is the placement of his hands: it could be an intentional change Flores was trying, or it could be something so small that nobody really though much of it, but his hands are positioned significantly lower. His top hand is even with his shoulder now, and his bottom hand is lagging well below the Mets logo patch, which is really saying something. It’s hard to go lower than the Mets.

This is a big problem. Flores still needs to get his hands to the same load location before actually swinging, but now he’s made it more difficult for himself. To reach that same point, his hands have to travel a longer distance than they did in previous seasons. The difference those few milliseconds make is the difference between catching up to a pitch and driving it out of the park, or hitting a lazy fly out.

Again, they’re identical. His chin is on his shoulder, his torso is twisted and leaning out past his front knee, and, most importantly, his hands are completely loaded. They’re so far back that they’ve moved behind his head, and aren’t visible in the picture. Now look at 2018:

I’ve circled Flores’ hands in that image, which should raise a big red flag. In the previous swings, his hands were cocked further back, and weren’t visible. Now, by lowering his hands, he hasn’t had enough time to move them to the same point. This also leads to less torque in his hips, and a torso that is almost dead even with his front knee. His bat speed and power are both far less reliable in this swing, meaning that he is more likely to hit the ball the other way, and less likely to hit them hard on a consistent basis. We’ve already seen how far his hard hit percentage fell this season, so now let’s look at the distribution of Flores’ contact:

That should scare you. You should cover your eyes like in Bird Box, and never watch baseball again after seeing that. That dramatic of an increase of hitting the ball the other way, without any significant change in pitch distribution against lefties, indicates that the problem lies with Flores’ swing. Not everyone can be J.D. Martinez, hitting homers to right field like he’s a lefty, and Flores has, predictably, seen his slugging against lefties tank as well. Here is his chart in the previous three seasons:

That’s pretty good! A lot of red! If Wilmer Flores was playing Pandemic, he’d be pretty close to winning. But that’s before looking at 2018:

Now if he was playing Pandemic, he’d be losing. Badly. The doctors have found a cure for his disease, but he’s still trucking along naively, spending his Plague Points on something dumb like bird transmission. Before long, the whole world is going to be healthy again, and Wilmer Flores won’t be remembered as a lefty masher, but as a guy who cried one time. Would you rather cry, or completely decimate the world’s population? It’s an easy choice, and Flores has made the wrong one.

Ultimately, The Diamondbacks aren’t going to be good in 2019, and should they pick up the option on Flores’ contact, they probably aren’t going to be good in 2020 either. Flores is a buy-low candidate, and the hope is that he can once again adjust his swing to regain his from against left-handers. He would be a valuable platoon option to pair the the Diamondbacks group of lefties, but for that to happen, some things need to change. Otherwise, Flores might find himself back on the free agent market without any suitors looking to bring in the former folk hero. 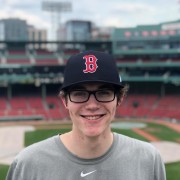 Dakota is a sophomore in college, and one day he wants to be a baseball announcer. He is 6'5'' with size 17 shoes, a fan of the Boston Red Sox, and he is afraid of moths. Last year he finished in 5th place out of 10 in his fantasy baseball league. Follow him on twitter @kotalov16.