You may recall that I wrote an article about the A’s and their early season struggles just a couple weeks ago. That’s no longer the case however, because they’re one of the hottest teams in baseball and have won 10 consecutive games.

While they technically do have a 10-game winning streak, the A’s only have a seven-game streak in the eyes of the MLB standings after their suspended game in Detroit last week left the game to be without a winner until September. Oakland had a 5-3 lead, and needed to retire just three Detroit batters in the bottom of the seventh for the game to be completed when rain suspension had occurred with a 2-2 count to the first batter of the inning. It was a controversial move by the Detroit grounds crew, as it appeared to have not even been raining when they pulled the tarps out. The Tigers were three outs away from the game counting as a loss if they were to call it after the inning, questioning if they were being sneaky by suspending the game just in time before the A’s would have gotten through seven full innings with a 5-3 lead.

The suspension, which will now move the make-up game to Oakland when the Tigers visit the A’s on September 6 to open a three-game series, would have been win number four of this current 10-game winning streak by the Athletics. Now, MLB.com currently holds a “W7” under the “STRK” column for Oakland, however shows them 10-0 in their last 10 games.

So, while the A’s may officially have a seven-game winning streak, they’re really riding a 10-game hot streak, and were three outs away in Detroit from it potentially being an 11-game winning streak. While it can be confusing to define what kind of streak they’re currently on, let’s take a look at the recent success of these Swingin’ A’s of Oakland.

After beginning the season with a cold offense, struggling rotation, and under-performing bullpen, the Athletics quickly fell to the bottom of the AL West and held lots of concern for the remainder of the season. Some A’s fans weren’t concerned, however, following the unexpected and outstanding mid-season run by Oakland last season that rode them to their fourth postseason birth in the last seven years. Many surging teams like the A’s have one date at some point in the year that’s their turning point; where their early season struggles lead to a strong remainder of the year. Last season, it was June 16: a day on which the A’s entered with a 34-36 record and went an outrageous 63-29 from that point on to finish with 97 wins; the fourth most in baseball.

Oakland’s magical date has come a bit earlier this season; May 7. Non-coincidentally it marked the return of first baseman and slugger Matt Olson, who played his first game in the majors since March 21, where he broke the hamate bone in his right hand during the Opening Series in Japan between the Mariners and A’s, which forced Olson to undergo surgery and leave Oakland without their power-hitting first baseman.

The date was also special for another reason; it was the night of Mike Fiers’ no-hitter against the Cincinnati Reds. In a game that began over an hour and a half late (8:45 PM PST) due to a lighting issue at the Oakland Coliseum, Fiers threw a 131-pitch no-hitter – the second of his career – to lead the A’s to a 2-0 win over Cincinnati. It was a badly needed victory for the Athletics, who were returning home after an ugly 1-8 road trip in Toronto, Boston and Pittsburgh.

Since the A’s returned to Oakland, Matt Olson returned from the injured list, and Mike Fiers hurled a no-hitter all in the same night, the Athletics have gone 14-4 to jump from last place in the division to second with a 29-25 record. Over those 18 ballgames, the A’s have outscored their opponents by 41 runs and have achieved series wins in four of their five series. The only series loss came in Seattle, where they dropped both games of the quick two-game set by one run each.

The A’s bullpen has also made a comeback after a rough month of April, in which they managed just a 4.14 ERA and 4.67 FIP while being responsible for seven losses; fifth most in the majors. They’ve turned things around in May however, collectively owning a 3.58 ERA (9th), 1.23 WHIP (11th), 4.18 FIP (16th), 1.15 HR/9 (15th), 3.58 BB/9 (14th), 8.42 K/9 (7th), and 79.8 LOB% (5th). The Oakland ‘pen has done an excellent job of stranding runners and limiting runs this month, led by strong performances from almost everyone in the bullpen, mainly: Joakim Soria, Liam Hendriks, Yusmeiro Petit and Ryan Buchter. Blake Treinen and Lou Trivino have also contributed a fair amount in May, however have also had some struggles and overall have been inconsistent. 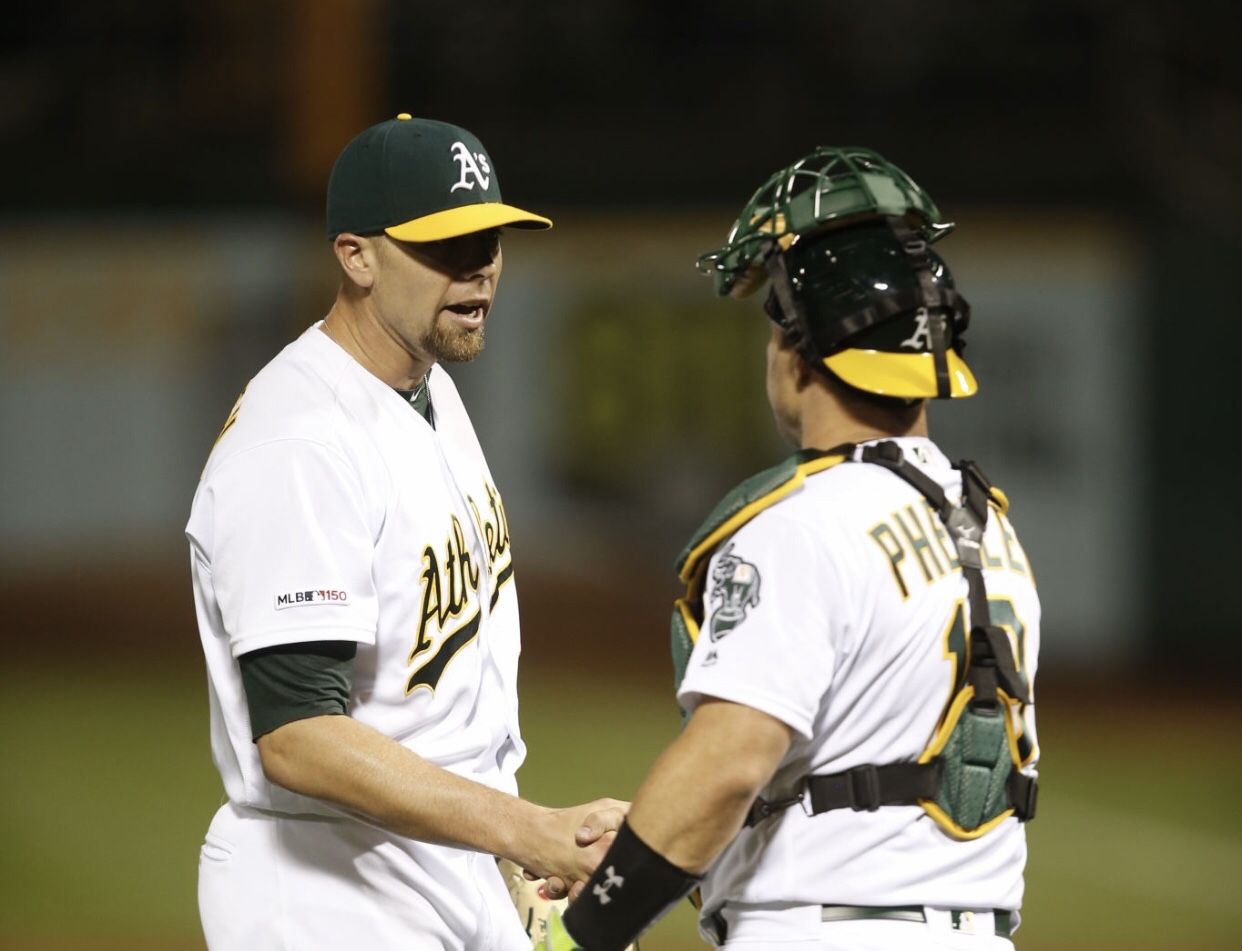 Some winning streaks consist of a strong pitching staff carrying a quiet offense, or vice versa, but this hasn’t been the case for the A’s. Their offense has been just as good as their pitching staff, and is the reason why this winning streak is likely to lead to continued success for Oakland. 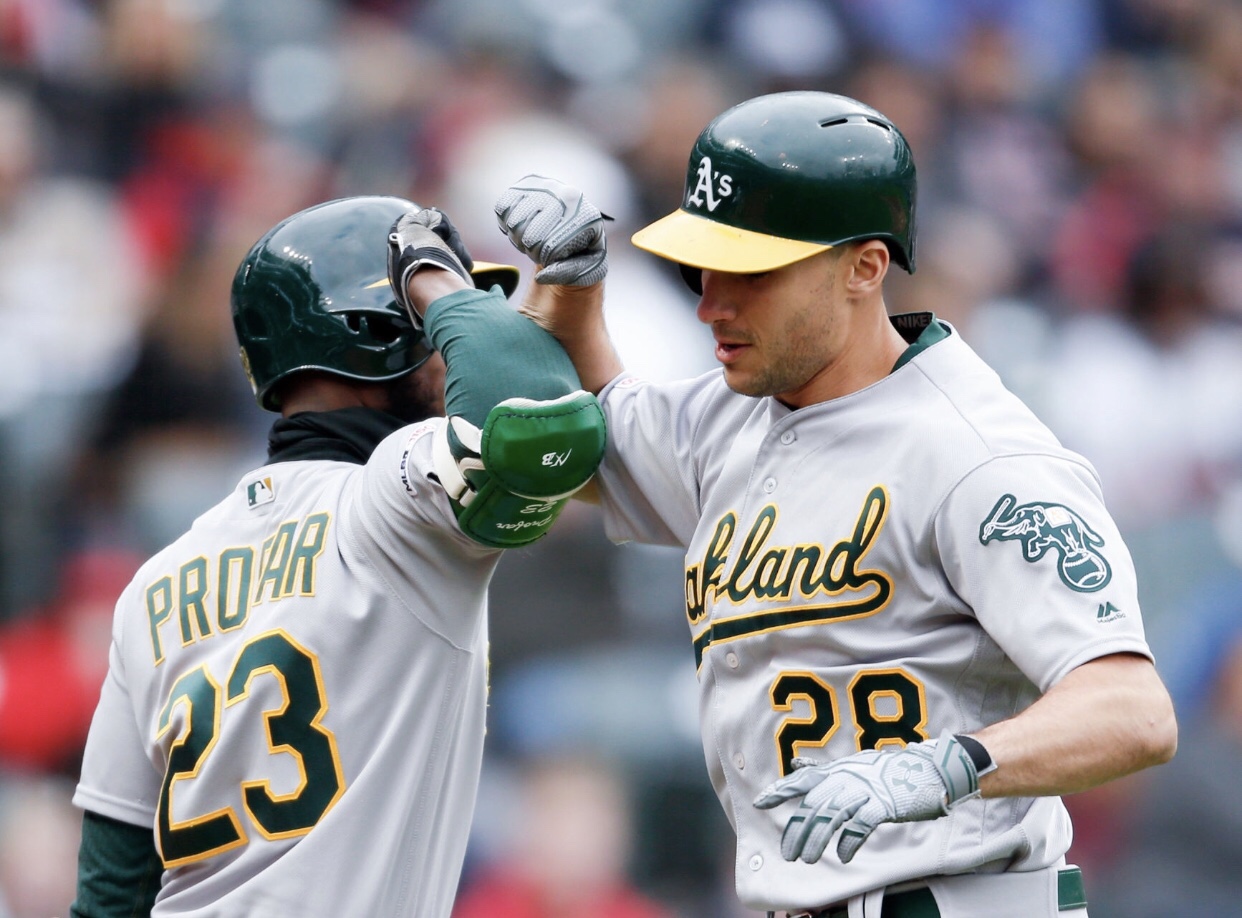 Several A’s hitters have produced in May, with a few of them being players who scuffled in the beginning of the year. Oakland has one of the top power offenses in the big leagues again this season, leading the Athletics to the 11th most runs scored in the majors. While it’s questionable whether or not the starting rotation can sustain its success, the bullpen appears to be back to its ways as one of the top relief staffs in baseball, and the offense is receiving big contributions from the players that they need it from in order to succeed.

The A’s, who at their lowest stood six games under .500 as recent as their last loss, have gone on an outstanding win streak to put themselves at 29-25; second in the AL West. While the Astros will be a very difficult team to chase down for first place, Oakland could be a Wild Card favorite down the stretch, currently tied with the Red Sox for the second Wild Card spot in the American League. With lots of baseball to play, we’ll see if the A’s can continue this run of success and fight back to the postseason for the second straight season. 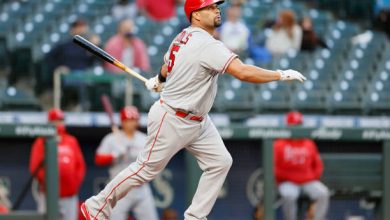