When Nick Allen heard his name called as the 81st overall pick in the 2017 MLB draft there was little to no fanfare. Projected to go as early as late in the first round by some, MLB organizations grew apprehensive over concerns about his size and lack of power. He was only 5-foot-8, 158 pounds when drafted, after all. Whether deserved or not, scouts always have a difficult time projecting prospects that small as productive major league players. Those concerns can easily compound when said prospect has struggled to hit the ball with much authority in his career.

The diminutive shortstop’s calling card will always be his defensive prowess. The third rounder was already considered a major league ready defender at 18 years old making plays like this during the Perfect Game All American Classic in 2017. He has exceptional range, superlative hands, and a strong and accurate throwing arm. Put it all together and you get an impressive defensive player, capable of making highlight reel plays at any moment. No matter how his bat develops, it’s his glove that’ll punch his ticket to the bigs.

Assigned to rookie ball after the draft, he did nothing to help alleviate concerns about his lack of pop. In 154 plate appearances he managed only 6 extra base hits and finished with a meager .254/.322/.326 slash line, good for an 84 wRC+. As if 2017 was bad enough, 2018 proved to be even harsher for the young infielder. His slash line fell to a putrid .239/.301/.302 and his wRC+ dropped 11 points, down to 73, in 512 plate appearances at Single-A Beloit. He needed to start showing advancements with the bat or he was in serious danger of falling off the prospect radar entirely.

Fast forward to 2019 and suddenly Nick Allen is driving the ball with more authority than ever before. Allen has already surpassed his extra base hit total from all of 2018, when he hit 23 total, as he has banged out 24 in 237 plate appearances for High-A Stockton. Among his 24 extra base hits are 3 home runs which, after failing to record a single one with Beloit, is a noteworthy development. His wRC+ is up 52 points from his stint in Beloit to 125 and his slash line is a healthy .292/.359/.455. The catalyst behind Allen’s offensive surge? An off season visit to the weight room. Arriving to Spring Training after adding 10 pounds to his frame, the difference in the quality of contact Allen made was apparent as his exit velocity soared to 95+ MPH according to A’s farm director Keith Lieppman.

Allen’s defense gives him a luxury of having a very high floor. If his bat stalls and he proves to be a below average offensive contributor he will still be able to produce 1-2 WAR annually as a big leaguer. Think Nick Ahmed. He can be an above average starter with just average offensive production. And if everything clicks for Allen? I see no reason why he can’t be a perennial all star and gold glove winner. We aren’t looking at the next potential Carlos Correa or Francisco Lindor, but Nick Allen has firmly thrust himself into the conversation when talking about tomorrow’s shortstops. He’ll never hit 30+ home runs, his wRC+ realistically won’t exceed 125 in the big leagues, but it doesn’t have to for him to be an impact major league shortstop.

The A’s took the best defender in the 2017 draft, one whose only below average tool was power. After finally committing to weight room improvements, they are only beginning to reap the rewards of their investment as Allen continues to mature physically and ascend the minor league ladder. No matter where his bat may ultimately settle there’s one thing of which I’m certain: Nick Allen is not the same Nick Allen of years past. 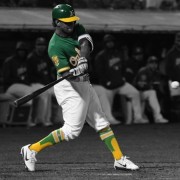 When I was 7 years old my dad took me out to the Oakland Coliseum to see my first professional baseball game. During the game I caught a Kurt Suzuki home run ball and then the addiction began. Eleven years later, here I am, writing about the A's. Matt Chapman.

When I was 7 years old my dad took me out to the Oakland Coliseum to see my first professional baseball game. During the game I caught a Kurt Suzuki home run ball and then the addiction began. Eleven years later, here I am, writing about the A's. Matt Chapman.
Find Us on Social Media
Popular Articles
Facebook Twitter WhatsApp Telegram
Back to top button
Close
Recent Posts
Meta
Meet the Team
Close
Close
Log In