As the deadline looms and a flurry of deals seem on the horizon, we should all be thanking the Tampa Bay Rays for giving us something to talk about while most other teams have opted to make their potentially season-defining decisions hours before the trade deadline. While no trade the Rays have made thus far can stack up to the blockbuster deals for Stroman and Bauer, the multiple smaller moves they have made over the past few days could be what the team needs to tip the postseason scales in their favor during what has been a precarious AL Wild Card race thus far. Coming into the deadline the Rays boasted one of the best pitching staffs in all of baseball as their staff currently ranks first or second in park-adjusted ERA, FIP, and xFIP. Thus, while most teams look for pitching help, the Rays have been shopping for impact bats to help boost their merely league-average offense. Early Wednesday afternoon the Rays found such a bat in the form of Brewers’ slugging first-baseman Jesús Aguilar, acquiring him in exchange for sputtering pitching prospect Jacob Faria, as Jeff Passan was the first to report.

Aguilar is likely to split time between first-base and the DH spot, which could potentially allow Tampa Bay to put the red-hot Travis d’Arnaud back at catcher, bumping Mike Zunino’s mediocre bat—.165/.227/.300 in 216 plate appearances this season—out of the lineup. Aguilar’s surprise breakout last season—a season which included 35 home runs and 134 wRC+—mirrored the surprise emergence of the Brewers as championship contenders and as the Brewers have fallen on harder times in 2019, Aguilar’s bat has cooled off significantly. In 262 plate appearances this season, Aguilar’s on-base percentage has dropped 32 points from 2018’s .352 and his wRC+ is a measly 82. These numbers are a bit deceiving however, as they are drastically effected by his horrid start to the season which was in part due to an cavernous .175 BABIP in April. After a 41 wRC+ in April, he posted marks of 95 and 88—recalling that 100 is league average—in May and June respectively and has looked more like his 2018 self in July, hitting .298/.346/.574.

While Aguilar seemed to benefit from some batted-ball luck in 2018 on account of his .374 wOBA in comparison to his .358 xwOBA, the opposite seems to have happened in 2019. The 38 point difference between Aguilar’s .304 wOBA and his .342 xwOBA is the fourth most drastic xwOBA under-performance among hitters with at least 250 plate appearances this season. This alone would suggest Aguilar could contribute more than his current numbers project for the remainder of the season. On top of this, Aguilar has been hitting the ball harder and harder since the start of May. Below is his 50 game rolling Hard-Hit percentage—or the percentage of balls hit with an exit velocity of 95 miles per hours or greater—over the past three seasons.

His slump at the beginning of the season shows up as the dip in early 2019 but since July 1, this graph is only moving up. Even better, his recent surge has his hard-hit percentage now back to the level he maintained throughout most of 2018. Couple in the fact that his strikeout percentage has only been decreasing since July 1 and it’s not difficult to see what has caused his reemergence. While he is a liability defensively, even if his bat cools off a bit from what he’s doing in July, he will remain an improvement over current Tampa Bay DH Ji-Man Choi, who has been a league-average hitter for most of 2019.

I would be remiss if I did not mention a few things about Faria heading to Milwaukee in return. While he was previously a substantial pitching prospect for the Rays, after a decent debut in 2017 where he posted a 3.43 ERA over 86.2 innings, 2018 was nothing but a struggle for the right-hander. Across 65 innings he posted middling strikeout and walk rates leading to a disappointing 5.40 ERA and a not-much-better 5.08 FIP. In AAA this season his ability to strike hitters out has returned, although, like most AAA pitchers this season, he’s given up a few too many long-balls. While the Rays have little shortage of arms, he could provide the Brewers some bullpen depth for the rest of 2019, and with their lack of major-league quality starters, could receive another chance to start games in 2020. Ultimately this deal makes sense from both sides; the Rays have little room for Faria, as they face a 40-man roster crunch come the offseason’s rule-5 draft—for more on this see this piece from the prospect team at FanGraphs—while the Brewers biggest need is starting pitching if they wish to contend in future seasons. Moreover as Milwaukee has seen their playoff odds drop by almost 30 percent since June 1, a bat like Aguilar’s will have a bigger impact on the Rays than the Brewers as they try to navigate the rocky race for a wild card berth in the American League. 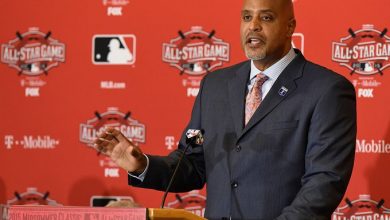 Recent graduate of Temple University with a degree in Mathematics and soon-to-be Ph.D. student at the University of Illinois at Chicago. Most of my time not spent reading/writing/thinking about Mathematics is spent reading/writing/thinking about Baseball. Here on Diamond Digest I write primarily about the Mets and Rays.
Find Us on Social Media
Popular Articles
Facebook Twitter WhatsApp Telegram
Back to top button
Close
Recent Posts
Meta
Meet the Team
Close
Close
Log In