Joe Maddon was introduced as the Cubs manager on November 3rd, 2014. His track record of sustained success with a notoriously low budget team like the Rays had Cubs fans dreaming of what he could do with an up and coming farm system. Add in the fact that the Ricketts family seemed committed to signing marquee free agents and it was understandable that expectations and pressure were already beginning to mount. This was a fanbase that had not won a World Series in 106 years and hadn’t even played in one since 1945.

Wearing jeans and an untucked collared shift, Maddon instantly ingratiated himself with the sometimes-hostile Chicago media. “I’m going to be talking playoffs next spring,” he said. “Otherwise why even report? I’m going to talk playoffs and World Series next year.” He immediately set the tone for an organization ready to move on from its past and drive ahead. After discussing his philosophies and telling stories, Maddon even capped off his press conference by offering to buy every member of the media a shot and a beer.

His ability to joke around and openly discuss questions was a refreshing change of pace from more straight-laced managers. This kicked off a healthy relationship between Maddon and the media for most of his tenure with the Cubs, besides a few missteps during the Addison Russell saga. In times of turmoil, Maddon always offered a measured calming voice in response to overreactions and outside noise.

Today, things are different. Instead of being a rising power in the league, the Cubs are a team that have seen their hopes for a dynasty fizzle after the thrilling success of 2016. After two disappointing Septembers in a row, Theo and co. have decided to part with Maddon and welcome an old friend into the fold; David Ross.

Casual fans last saw Ross being carried off the field by Anthony Rizzo and Jason Heyward as a World Series champion after playing his final game. In the past few years, he has been splitting time between his ESPN gig and acting as a “special assistant” to the Cubs front office. When Ross was announced as the team’s new manager, some saw it as Theo inserting a pawn into the position he could have more control over. Instead of the outspoken Maddon, Theo would be working with a first-time manager who owed him for the opportunity. Epstein denied these claims and said Ross will have his own decision-making power.

In his introductory press conference, Ross came off as slightly nervous but more focused and serious than Maddon ever was. His responses seemed prepared and calculated. This may be the exact edge the Cubs are looking for as they seek to maximize their World Series window that seems to be slipping away. Ross sought to distance himself from the fun loving “Grandpa Rossy” caricature that developed in his last playing season. “I think there’s a little bit of a misconception of ‘Grandpa Rossy,’” he said. “I don’t think that’s me in the dugout.” In addition, he downplayed his personal relationships with current members of the team and emphasized his ability to show tough love when needed.

Will a first-year manager juggling the pressure of leading a major market team at an organizational crossroads be able to offer the same calming voice Maddon once did? When the first big losing streak hits how will Ross handle that anxiety? Certainly, the teams play on the field will have the largest impact on how much scrutiny he will face. Nevertheless, that scrutiny will come. Ross’ time at ESPN has given him a foundation in the media and his personality drove him to become a fan favorite in only a few short seasons. Will leaving that personality behind and becoming a singularly focused, win now kind of guy serve him well or turn him into a fanbase scapegoat? When the talking heads start screaming, Grandpa Rossy might be the only mindset that keeps him sane. 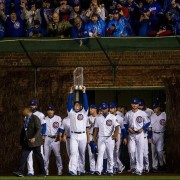