When the San Diego Padres traded for Tommy Pham, what got the most attention was Pham’s former teammate Blake Snell complaining about the trade, lamenting the fact that one of the Rays best hitters from 2019 was traded for Hunter Renfroe and a “slapdick prospect” (Xavier Edwards). With three well regarded players in Pham, Renfroe and Edwards involved in the 5 player trade, the Padres acquisition of Cronenworth went under the radar. He did provide the unique asset of being a two way player, but he had only pitched 7.1 innings since entering pro ball, and aside from his 2019 season at triple-A, hadn’t had a season with 300+ plate appearances and a wRC+ of 100 or greater since his 2017 season in high-A. But after filing in for an injured Eric Hosmer, Cronenworth has shown he may have been the real prize of the trade.

A quick look at Cronenworth’s fangraphs page will make your jaw drop. A .344/.364/.750 slash line with a .460 wOBA and a 201 wRC+ through 11 games is insane. His wRC+ ranked 10th in all of the MLB among players with at least 30 plate appearances as of Tuesday. It is eyebrow raising, especially since Cronenworth was never a top prospect (the team’s 17th ranked prospect) and never a stellar hitter in the minors. It becomes even more shocking with the realization that he’s actually underperforming. His xwOBA of .504 is 44 points higher than his wOBA. He is one of just two players with at least 25 batted balls and an xwOBA above .500, the other being Cory Seager with a .582 mark. The next closest to Cronenworth? Nick Castellanos, who has an xwOBA of .473. It is quite simply absurd.

There are really only two criticisms you can levy at Cronenworth thus far when it comes to the bat. His low launch angle of a flat 8 degrees means that he’ll never have elite home run totals despite regularly hitting the balls at 95+ MPH. But that doesn’t matter so much when he hits line drives that make his xwOBA sky high. The other complaint regards his low walk rate. While it’s true that he’s only walked 3.0% of the time so far, he’s no strikeout junkie. His K% of 15.2 is well below the MLB average of 23.6, and he rarely swings and misses. His contact rate on pitches in the zone is 91.4%, 7.2 points higher than the major league average of 84.2%; his swinging strike rate is a paltry 7.5%. Cronenworth’s walk rate is unlikely to stay that low, as well. He regularly posted walk rates in the double digits in the minors, and had a 12.1% walk rate in 406 plate appearances at triple A last year. There are really no other glaring issues with Cronenworth’s production: his .360 BABIP is high, but certainly not egregious for someone who scorches the ball as he does and sits in the 95th percentile for sprint speed. He is a supremely talented hitter, and a major reason why the Padres offense is one of the best in baseball so far.

Cronenworth isn’t just a bat first player, either. He can play any position in the infield, but has been limited to spending most of his time at first base. Despite playing the least important defensive position, he has still showcased his glovework. He has regularly made highlight reel plays and put up 2 DRS and 1.1 UZR in 61 innings at first base. These numbers would pace to 10.6 UZR and 44 DRS over a full season, but now that Eric Hosmer is back Cronenworth will most likely spend his time at second base. He’s already put up 0.1 UZR in 16 innings at the four position, and likely has some room for improvement as he acclimates there.

Hindsight is always 20/20, so it’s easy to denounce the Rays for giving up a player with such talent. But one must give A.J. Preller and the rest of the Padres props for being able to identify Cronenworth’s talent and acquire him from the Rays. There may not be many giving Cronenworth competition for ROTY, but though Dustin May will provide some tough competition. Cronenworth’s speed, fielding and bat, though, have made him one of the best players in MLB, not just among rookies. Dustin May is good, but still sits firmly in second behind Cronenworth when it comes to who the best rookie in the national league is. When BBWAA awards voting is announced in november, be ready to see Cronenworth’s name next to ROTY. 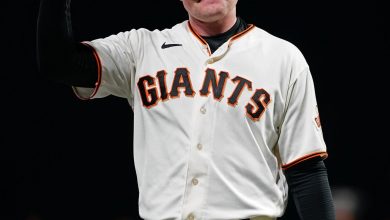