All offseason, Diamond Digest writers will be taking a look at each team’s 2020 season and looking forward at what moves each team might have to make to set themselves up for improvement in 2021. Today, Keegan Geisler takes a look at the Milwaukee Brewers!

The Brewers’ pitching overperformed and their offense stumbled in 2020. Does the Crew overhaul their lineup, or trust that slumps from their best players were just outliers?

I put some thought into naming Jedd Gyorko MVP, as he was consistently the most valuable batter, but nothing the offense did this year is comparable to Corbin Burnes’ re-emergence as a young ace. After getting shelled in his sophomore season, Burnes retooled his arsenal last winter, switching out his four-seam fastball for a two-seamer that tunneled perfectly with his other pitches. Consider that in 2019, his four-seamer gave up a .823 slugging percentage, and his two-seamer/sinker this year allowed less than half of that, at .406. Burnes goes into the 2021 season with five good pitches, with at least three (sinker, cutter, and slider) that are elite. Burnes is in the 99th percentile in fastball spin rate, and 95th percentile on his breaking balls, and everything points to his continued success.

Speaking of spin rates, Devin Williams spent the entire season defying physics with his absurd changeup/screwball pitch, putting together a season that stacks up against the greatest relief seasons of all time. I can pick out a couple of great stats to show that Corbin Burnes pitched well, but with Williams I get distracted every time I look at his statcast metrics. It’s hard to make a convincing case for Cy Young awards going to relievers, but Williams was so effective in his role it was a tough call regardless. Nobody expected this from Devin Williams, but now that he’s here, I expect great things from him in 2021.

For some folks, I’d imagine Christian Yelich is their biggest negative surprise for 2021. After two MVP Caliber seasons, Yelich barely squeaked over the Mendoza line by the end of the 2020 season. Before I get into my actual choice for biggest negative surprise, I should probably explain why I don’t think it should be Yelich. Mostly, Yelich’s 2020 is far more bizarre than strictly bad. Christian Yelich finished with an on-base percentage 151 points higher than his batting average. There were only five players in all of MLB that had a larger difference between the two numbers in at least 100 plate appearances. Yelich still slugged .430, still hit 12 home runs, and was third in the majors with 46 walks. Add that to his 99th percentile exit velocity and 98th percentile Hard Hit rating, and I have reached the point where I doubt any conclusions that can be drawn from this year. For a lot of players, 2020 carries an asterisk next to their accomplishments. For Yelich, I’m just going to add a bunch of exclamation points and question marks.

That said, oof, Keston Hiura, I did not see this for you. The 2019 version of Hiura obliterated the ball, with a 50% hard hit rating and a 13.9% barrel rate. He was only fifteen spots below Christian Yelich on the barrels leaderboard! Sure, his strikeout rates were terrible, and you had to figure he was getting a little lucky with the balls in play, but if he could improve his strikeout numbers a little and keep hitting the ball hard, he could continue to be a very valuable hitter, especially if he could stick at second base. Instead, his strikeout rate jumped another four points, and his hard hit percentage dropped by eleven. He was barreling the ball more than ever, but when he wasn’t, he was missing entirely, frequently on pitches in the zone. His weak contact rates weren’t meaningfully different from his 2019 numbers, but he whiffed on pitches six percent more this year. It’s hard to maintain 2019’s production with those kinds of numbers.

Hiura is still young, and still has a lot of room to improve, but if he doesn’t want to repeat this season, he can’t miss hittable pitches in the zone. We could always tolerate a high strikeout rate when it came with such great results with the ball in play, but 2020 has shown us that a low discipline, hard contact player has a long way to fall if their contact skills regress. Here’s to 2021, Keston, and hopefully some improvements in that regard.

Both of the Brewers notable losses need some context, as they aren’t the same as, say, the Phillies losing J.T. Realmuto. Braun is nearing the end of his career and is pondering retirement, but if he plays in 2021, smart odds are that he returns to the Brewers on an inexpensive one-year deal. If the universal DH is adopted for 2021, that increases Braun’s chances of continuing to be valuable, and despite a down year, Braun has shown he’s still capable of showing up in September. If Braun retires, or makes the decision to sign elsewhere, the Brewers don’t necessarily need to go find a different DH/part-time outfielder type.

Gyorko had his option declined when the Brewers decided to save the $4.5 million rather than retain their most effective offensive player. This tells us one of two things: Either the Brewers were skeptical of Gyorko’s ability to perform as well in 2021, or they’re just as susceptible to the same budget cuts as other teams following the revenue losses from COVID-19. I won’t eliminate some combination of the two as well, as the offensive projections for Gyorko in 2021 are not particularly generous.

Realistically, the Brewers have a fair amount of young players that haven’t figured it out yet, but Luis Urías has shown potential. That said, Orlando Arcia could very well have worn out his welcome in Milwaukee, and a non-tender could establish Urías as the everyday shortstop, leaving a hole at third base that would be greatly improved by a proven veteran third baseman like Justin Turner. The Brewers are usually a little allergic to long, high dollar contracts, so a shorter deal to an established player could help cover up their offensive woes and give leeway and development time to the inconsistent younger guys. Assuming COVID-19 is still a major factor by opening day 2021 (it will be), it must be said that Turner was grossly irresponsible after his positive test during the World Series. Given his response, it does not strike me as something likely to reoccur, but the Brewers were largely successful in managing coronavirus cases, and any player who could be an added risk deserves more scrutiny.

As for signing Jeffress, I mostly just think it would be kind of a fun signing, as Jeffress re-emerged as an all-star level reliever in 2020. It remains to be seen if there is any bad blood remaining after Jeffress was designated for assignment in 2019, but any bullpen arms tend to overperform in Milwaukee, given Craig Counsell’s reputation for excellent pitching decisions.

Taijuan Walker isn’t exactly the kind of pitcher I’d get excited about, but an inconsistent-yet-promising pitcher is the exact kind of move we see from the Brewers, and while it makes for some confusing rotation projections, Walker has shown he’s capable of being a valuable starting pitcher. At the very least, Walker could slot in as a fourth starter, allowing Adrian Houser, Freddy Peralta, and Eric Lauer to compete for the fifth spot. The problem: with Marcus Stroman and Kevin Gausman accepting qualifying offers, the starting pitcher market is already running out of players, and the Brewers traditionally don’t get involved in bidding wars. If teams like the Blue Jays want to go all-in and sign a lot of pitchers, the Brewers will likely retreat and try to build a staff through other means.

I only suggest one trade this year, because I imagine that the Brewers will pull off several swaps of near-major league assets, but it’s anybody’s guess who those players will be. Besides those characteristic Brewers trades, there is only one I have a strong opinion on.

Hader is still a very valuable pitcher, but relievers are an immensely volatile group, and Hader’s underlying stats on his most important pitch, his fastball, show some concerning signs. He lost about a tick on its velocity, and eight points of whiff rate between 2019 and 2020. Hitters just weren’t swinging through his fastball like they were last year. Hader did compensate this year, throwing his slider far more often, which induced a lot of weak contact and whiffs when batters opted to swing, but he kept his propensity for allowing home runs, with a barrel rate in the bottom 20 of all pitchers. Will Hader continue to be a reliever of the year contender in 2021 and beyond? I don’t know, maybe, but the uncertainty is enough to trade him now, when you have obvious needs and a bullpen that can afford the loss.

This isn’t to say that you should just trade Hader for any random prospects. The test has always been whether a team will shell out enough value to make it worth the loss. What about the Phillies? Philadelphia is in full desperation mode for relievers, and they might be willing to give up somebody like Rhys Hoskins? He’s a hyped player who hasn’t quite hit for as much contact as one might like after his 2017 rookie season, but who gets on base at an elite rate and has enough power to dream on. That kind of trade could take additional assets, but those would likely be the kind of lower-level prospects the Brewers can afford to lose. If not for somebody like Hoskins, I could easily see another reclamation project in somebody like Josh Bell. The Pirates are woeful and will probably look to cut costs, and a third-year arbitration player making north of $5 million isn’t really in their future plans. I would say that smart money has Hader pitching in a Brewers uniform next year, but any trades for controllable offensive talent should be explored in full this offseason.

The lineup construction is in a lot of flux depending on the Brewers’ off-season moves. If they sign a third baseman, Urías and Arcia likely share time at shortstop, and if they end up with an extra first baseman, Vogelbach might be in a timeshare depending on positional versatility. Add to that Craig Counsell’s deep, abiding love for tinkering with the lineup, and any confidence I had past the first two spots vanishes.

If even half of the under-performers from 2020 can turn it around in 2021, the Brewers offense can definitely be competitive. The return of Lorenzo Cain anchors the leadoff spot, and Christian Yelich is capable of carrying a team when he gets hot. But the Brewers can’t afford to have this many noncompetitive at-bats next year, or they risk wasting another good season from their pitchers. With the Cubs tumbling down a hill into a ravine, and the Cardinals cutting good, productive players, there is still a lot of opportunity in the NL Central, and I expect the Brewers to take advantage. 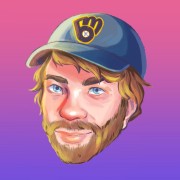