In a week where Spencer Turnbull twirled the eighth no-hitter in Tiger’s history, two exciting Casey Mize outings have been on the back burner of many fan’s minds. While Turnbull’s gem may be most memorable, Mize’s continued ascension is every bit as important as the Tigers move forward in this difficult season.

From the time he was selected as the team’s first #1 overall draft pick in more than 20 years, Mize’s progress has been followed attentively by the Tigers and their fans. A quick rise through the lower levels of the minors, highlighted by a no-hitter of his own in his Double-A Erie debut, only ramped up the hype surrounding his eventual arrival in Detroit. However, since premiering with the team in August of 2020, Mize has dealt with his fair share of turbulence, not immediately posting the sterling performances many had dreamed of.

Suddenly, however, Mize has begun to take steps towards becoming the high-level arm that was expected. In each of his past four starts, he’s gone at least six innings and posted an ERA of 1.73, with his best performances of the year to date coming in his past two starts against Seattle and Kansas City. Pitching into the eighth inning for the first time in his major league career against the Mariners, Mize struck out a season-high seven and induced plenty of weak contact early in counts using a variety of pitches, all while surrendering only a solo home run to Tom Murphy in the run department. Facing the Royals, he seemed to use his entire arsenal of pitches to record outs, again allowing only one run over 6.1 innings while recording six strikeouts.

When assessing the future for Casey Mize, it is important to both observe what has allowed him to find his recent success as well as what could still hinder his continued development. Although these past few starts should have the Tigers fans excited for what’s to come, questions still remain for how Casey can take an even larger leap towards stardom.

Throughout his time in the majors, Mize has posted strikeout numbers that are not only below league average but also greatly lagging behind the frequency with which he was obtaining them in the past, with his K/9 sitting at a measly 6.6 even following his fantastic recent starts. Strikeouts are not an end-all for pitchers, but in an era of baseball in which strikeouts are occurring more than ever, it is odd to see a pitcher with Mize’s stuff struggling to obtain them. Building off strong outings is an important step for Mize as he looks to grow more comfortable at the major league level, yet it is also fair to question if his lack of punchouts could hinder his ability to take the next step.

When taking a look at the possible causes for the low strikeout rates, the most striking development is his struggles with command of his off-speed and breaking pitches, specifically his splitter. A pitch that was commonly touted as his best during the pre-draft process due to both its strong break and Mize’s impeccable command of the pitch, it was believed this would be Mize’s greatest weapon at inducing swings and misses. Yet this had rarely been the case early in the season, as Mize has struggled to throw the pitch effectively and has used it at a clip that is much lower than one would expect for his put-away pitch. 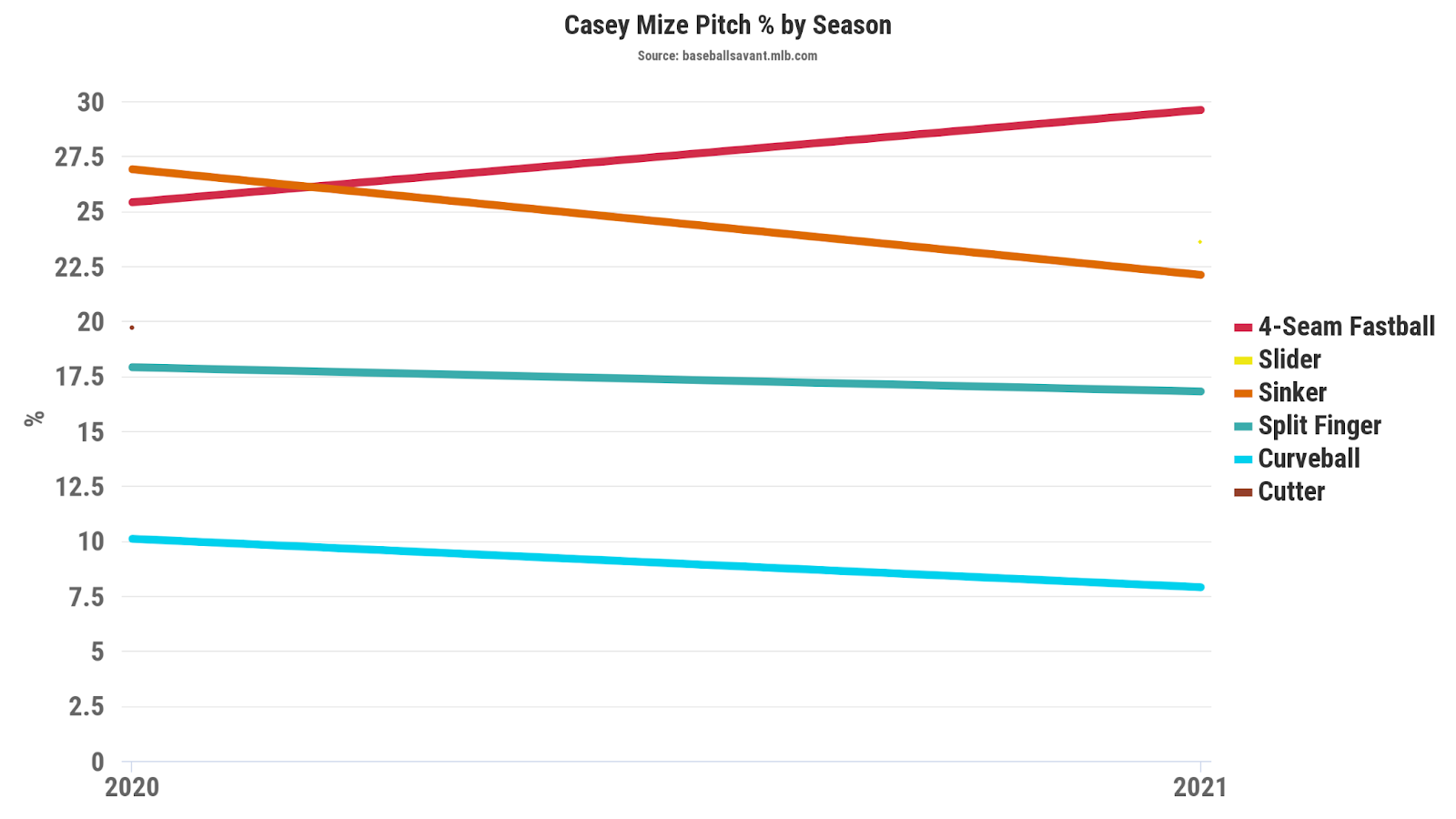 As shown above, his splitter is hovering around the same rate of usage as in 2020 at around 17%, the fourth-most in his arsenal. Yet Mize’s lesser usage of the pitch can’t be attributed to a lack of bite or effectiveness, as in 2021 the pitch ranks among the top of the league in % Drop vs Average at 7% while also having a strong horizontal bite with % Break vs Average of 13%. This shows that the splitter not only has a vast drop compared to other similar pitches but also breaks heavily side to side, with the closest comparison in spin to that of Mize’s being the splitters of Kevin Gausman and Kenta Maeda.

Gausman and Maeda’s splitters frequently rate as some of the most effective pitches in baseball, as both veteran right-handers seem to have figured out how to use the pitch effectively. Mize, on the other hand, hasn’t seen nearly the success of his counterparts, however, as in 2021, his splitter has been worth a run value of merely -1, a solid yet unspectacular number, with opponents slugging .382 against the pitch and whiffing on a paltry 16.4% of the swings against it. The peripherals on the pitch are even less encouraging, as the xBA and xSLG on the pitch sit at .339 and .557, respectively, both the worst marks for all pitchers who have thrown a qualified number of splitters in 2021.

Although this may seem to come as bad news for the Tigers, the answer for what’s holding this pitch back seems clear. Due in part to the strong movement, the pitch has, Mize has struggled to locate the splitter effectively. To be most effective, a good splitter should start in the zone and break beneath it, and as the graph above shows, Mize is simply leaving too many splitters out over the heart of the plate, giving the hitter a much better chance to at least spoil it if not punish his mistakes. Still not even a full season into his MLB career, it seems Mize is still searching for consistency with the pitch. Luckily, new pitching coach Chris Fetter has shown the ability to make effective adjustments for numerous Tigers pitchers that have already yielded strong results, which should leave Mize in very good hands. Once Mize is able to trust his ability to finish hitters with the splitter, this will only further allow him to pitch deep into games and make hitters look silly.

While Mize’s splitter struggles may be cause for long-term concern in regards to putting away hitters, the recent positive signs still strongly outweigh those negatives. A maturation in approach has been obvious in recent games, as Mize has been much more willing to attack hitters which has keyed his ability to work deep into games even despite a high walk rate of 10.1% in those past four strong starts. His slider, listed as a cutter in 2020, has also become a weapon, with hitters batting only .174 against the pitch. Most significantly, Mize is also obtaining a greater number of ground balls this season, with his GB% up from 39.3% in 2020 to 53.4% in 2021, especially important due to his lack of K’s. In starts where Mize has been forced to battle poor command, the ability to keep the ball on the ground to limit damage and induce double play balls has keyed his working deeper into games.

All together, the numbers signal that Casey Mize has taken some huge steps forward from his shortened debut season. Now an even bigger test begins for Mize as he searches to become not only a successful big leaguer but one of the top pitchers in the game, which could seemingly bank on his ability to command his pitches consistently. Although his recent dominance may be exciting and a lone bright spot for a team off to a rough, it is important to not expect too much of a young arm like Mize too quickly, as struggles may still ensue. Yet with the leaps he’s taken in less than 20 MLB starts, it seems like a poor idea to bet against Casey Mize, with these recent starts only the surface of the heights he could reach. 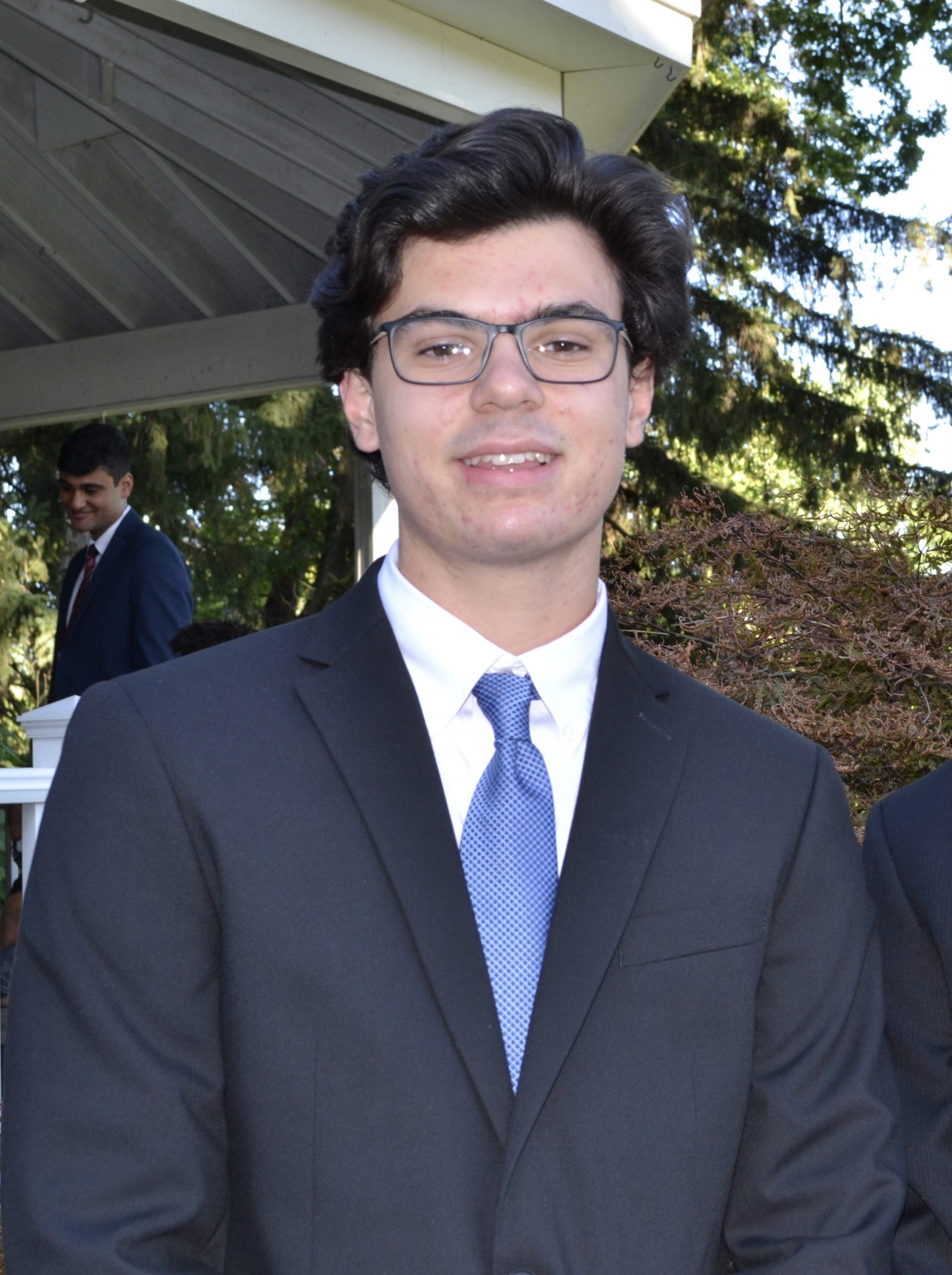 David is a Tigers writer from the metro Detroit area and a student at Michigan State University. You can find him on Twitter @dselemba5.
Find Us on Social Media
Popular Articles
Facebook Twitter WhatsApp Telegram
Back to top button
Close
Recent Posts
Meta
Meet the Team
Close
Close
Log In