Ever since the departure of Brian McCann after the 2013 season, the Atlanta Braves have lacked stability at the catching position. Different names bounced around behind the plate for the Braves: Gattis, Pierzynski, Flowers and Suzuki. All provided serviceable performances but nothing of note.

That seemed to change when the two-year $16 million signing of Travis d’Arnaud finally produced a .919 OPS in the shortened 2020 season. He hit cleanup to complete the buzz saw of a Braves offense that included Acuña, Freeman and Ozuna. However, 23 games in 2021, he had just a .594 OPS and was placed on the 60-day IL with a ligament injury in his left thumb. No confidence was placed in backup catcher Alex Jackson, who himself sported an abysmal .258 OPS.

Brother of Willson Contreras of the Chicago Cubs, William Contreras had shown promise in the minor leagues. The numbers were never spectacular, so extreme modifications to his swing were made. Grant McAuley (@grantmcauley) demonstrates the simplification of Contreras’ swing since 2018.

Contreras got his sip of the big leagues in 10 whole plate appearances in 2020 when D’arnaud and backup catcher Flowers were unavailable thanks to COVID-19 symptoms.

In his first plate appearance, he ripped an RBI double in extra innings.

He’d finish the year batting .400, albeit in just four games.

However, the Braves liked him enough to give him the chance to be the everyday catcher in 2021. In his first 70 plate appearances of the year, he’s impressed.

This idea of sustainability is further bolstered by the fact that Contreras has no weakness at the plate. Fastballs? xSLG of .532. Breaking balls? xSLG of .495. Maybe throw him something offspeed? xSLG of .722.

Since his debut game in 2021, he’s second in fWAR and first in WRC+ among catchers with as many plate appearances. Over the entire season, he’s fifth in WRC+ with 138 and second in ISO at .305. That power can be seen below in a 463 ft homer off Toronto ace Hyun Jin Ryu.

A dream come true right? Except for just one thing. Just like his brother, Contreras’ shortcomings don’t come at the plate, they come from behind it.

On one hand, Contreras has a cannon. He sports a solid 36% caught stealing percentage.

Things go downhill quickly from there.

According to Fangraphs defensive metric (Def), Contreras ranks 30th out of 43 qualified catchers. He’s 38th out of all catchers in framing. But you can live with that if his bat continues to create runs at the rate that it has.

Then there are the passed balls.

Quality backstops Christian Vazquez and Yasmani Grandal lead baseball with five passed balls. Contreras only has three. Pretty good, right? Here’s the thing. Grandal has over 100 more innings in the field as a catcher than Contreras. Vazquez has 179.1 more innings.

Because passed balls is an opinionated stat determined by the scorer, let’s look at wild pitches. Vazquez and Grandal have allowed 13 and 11 wild pitches, respectively. Contreras has 12.

This issue was highlighted last Wednesday, May 26th. Braves starter Drew Smyly found himself winning in a 4-3 ballgame in the 6th inning with runners on first and second with one out. A wild pitch on an offspeed pitch inside to Xander Bogaerts allowed the runners to advance. This could have easily been ruled a passed ball. A slow bouncer off the bat of Bogaerts would have gotten one if not two outs to end the innning, but instead it scored the run. The disaster of an inning ended with the Braves down 7-4.

The Braves did not recover and lost 9-4, but not before Contreras smashed a solo homerun over the monster to try to redeem himself in the 9th inning.

An argument could be made that he calls a solid game. Before his first game in 2021, the Braves pitching staff ranked 28th in team ERA with a 4.97 mark. Since moving to the starting role, Contreras has helped that number plummet to 4.24, good for 19th in the lead. Whether this change originates from adjustments by the Atlanta pitching staff or by Contreras’ game calling is debatable.

It is clear that Contreras’ bat will be a mainstay in Atlanta’s lineup for the foreseeable future. Adjustments behind the plate could make him go from an exciting rookie to one of the best catchers in MLB. 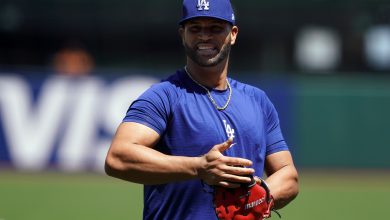 The Slow, Painful Death of the First Base Mega-Deal