For a team that won their division while maintaining the majority of their core players, the Oakland A’s were in a shocking position on July 26th. After a 3-4 loss to the Seattle Mariners, the A’s held just a one-game lead on the second wild-card spot over the surging Seattle Mariners, while the gap between them and the AL West-leading Houston Astros grew to five games. They had lost six of their last nine series, and the team was sliding hard. They needed change.

So change they did. In the span of 48 hours, the A’s traded for left-handed reliever Andrew Chafin and OF Starling Marte, paying significant prices for both. With the trades of top organizational prospects as well as young, extremely gifted arms, the A’s focus is clearly on the now. But in an extremely competitive AL West and AL Wildcard scene, are their recent acquisitions enough?&nbsp;

When looking at the A’s, no major team weaknesses stand out. Their offense is top 10 in wRC+, their rotation is sixth-best in fWAR, and while their bullpen has been middling, it has the fifth-best ERA in the American League. The cracks only start to show when you take a deeper look. That top 10 offense is buoyed by the duo of Matt Olson and Mark Canha, producing to the tune of a 160 and 137 wRC+ respectively. Ramón Laureano is the only other qualified A’s batter with a wRC+ over 110, and he’s hovering at a mark of just 111. Of the 11 A’s batters with at least 100 plate appearances this season, only six have a wRC+ on the right side of 100.

While their offense is relying on top-end talent to make up for lackluster depth, their bullpen was in the almost exact opposite position.&nbsp;Ironically the team with the most stable bullpen in the AL West (The A’s have used 17 different players to make relief appearances this year, the fewest in their division) has arguably been the one most impacted due to injuries. After a 2020 that saw him return to form after Tommy John Surgery, the A’s decided to sign Trevor Rosenthal to be the heir to the departing Liam Hendriks’ closer role. Unfortunately, injuries hit Rosenthal again and he was rendered unable to pitch in 2021 after undergoing surgery to repair a torn hip labrum, which he suffered while rehabbing from another surgery. The loss of Rosenthal left the A’s without a top-end reliever. Their depth is quite good, as their worst reliever by FIP, Jake Diekman, has just a FIP- of 104. But the lack of a true closer option has impacted them hard. Their ERA in the 7-9 innings is 4.00, compared to their 3.73 in innings 1-3 and 3.58 in innings 4-6. The A’s have fine depth, but their lack of top-end arm talent leaves them dealing with late-inning blowups whenever the bullpen is dealing with high usage.

Starling Marte, brought in to help the offense, will join Canha and Laureano in the outfield and replace the platoon of Stephen Piscotty and Seth Brown. After a lackluster 2020 wherein he paired with fellow Marte Ketel in Arizona, Starling came back with a vengeance in 2021, putting up a 140 wRC+ in Miami and getting himself on track for his best season since 2014. Marte is a known commodity at this point. He’s a line-drive hitter who uses a high average to supplement his usually lower OBP while hitting a lot of doubles and 15-20 home runs a year. The one thing that’s changed about Marte is his plate discipline. Currently, Marte is running the best walk rate of his career, a mark of 11.8%, due to a drastic change in plate discipline. While spending most of his career as a free swinger, Marte has dropped his swing rate on pitches outside of the zone and his swinging strike rate both to career lows, good enough to give him a walk rate in the 82nd percentile. Marte still has the power and athleticism normally associated with him, but his increased walk rate gives him the potential to be a true offensive force. Marte is also a fantastic defender in center. Compared to the incumbent Laureano, Marte is superior by Defensive Runs Saved, Ultimate Zone Rating, and Outs Above Average. Not only does Marte give Oakland another strong bat in the lineup, but it also allows the A’s to improve defensively by moving Laureano to right field where his rocket arm will play up and give them more range in center.&nbsp;

A former teammate of Marte, Josh Harrison, will also be joining the A’s position player group. Much like Marte, Harrison is a line-drive hitter whose slugging percentage comes from doubles instead of homers. Unlike Marte, he doesn’t walk as much. He’s an aggressive hitter, with his current walk rate of 7.0% being the highest in his career. But despite his high swing rates, Harrison’s career strikeout rate is just 15.1% and in 2021 he’s striking out at a paltry 13.9% rate. Harrison has been able to elevate his OBP and SLG to the point where he’s producing a 117 wRC+ despite his low walk rate and .141 ISO. Harrison has played every position besides catcher at least once in his career, but the majority of his playing time has come at second base where he grades out as an average to an above-average defender, depending on what stat you’re looking at. The 37-year-old Jed Lowrie has been Oakland’s primary second baseman this year, but a combination of age and injuries has meant he has struggled mightily in the field. With Harrison out producing Lowrie in both hitting and defense, Lowrie will likely move to DH where his beat-up body takes less wear and tear.

Also acquired in the Josh Harrison trade, Yan Gomes is likely to serve as the A’s backup catcher while also seeing some time at DH. Another line-drive hitter, the 34-year-old has notable pop, with his .183 ISO being the bulk contributor to his 105 wRC+. He needs that pop, because while his 20% strikeout rate is above average, his 5.5% walk rate is significantly below average. Gomes struggles defensively behind the plate, which will force him onto the bench or to the DH role while Sean Murphy starts. Compared to previous backup catcher Aramis Garcia, Gomes is a major upgrade offensively at the cost of worse defense. The addition of Gomes gives the A’s another player who could come off the bench as a pinch hitter, and he’s not a bad enough defender to sink the team’s pitching.

To improve the bullpen, the A’s went out and got Andrew Chafin from the Chicago Cubs. The left-hander came roaring back from a career-worst season in 2020 to now be on pace for his best year in the bigs here in 2021. Unlike previous years, Chafin is not a strikeout pitcher. His 24.8% strikeout rate is the lowest of his career since 2015. Instead, Chafin has transformed himself into a master of soft contact. In Chafin’s 40 innings pitched this year, he’s given up just one homer. His groundball rate of 50% keeps hitters from getting extra-base hits, and his 90th percentile hard-hit rate makes sure those groundballs don’t turn into hits. While FIP might not be the greatest stat to measure a pitcher like Chafin, his mark of 2.63 ranking 18th among qualified relief pitchers does reflect just how good he’s been this year. Chafin easily becomes the A’s best reliever and should quickly slot into their closer role, providing them with the elite bullpen arm they’ve been lacking.

While the A’s trades may have gotten lost in the chaos of this year’s deadline, they’re still solid additions to a club that was on the verge of losing its playoff spot. In effect, the A’s acquired two bats that should be in the starting lineup every day, a third bat that can DH and be utilized as a pinch hitter, and an elite bullpen arm. Their biggest addition, Starling Marte, fills the spot that was previously kept warm by the replacement level Seth Brown and Stephen Piscotty. He joins Mark Canha and Matt Olson as the A’s best hitters, giving them a trio of 130+ wRC+ bats, while also helping out on defense. Josh Harrison is a utility player with a bat strong enough to earn a starting role. He can either be a full-time second baseman or move around to give certain players days off depending on player workloads. Yan Gomes serves as a bench bat who hits at a league-average level and can be utilized as a backup catcher or DH depending on the handedness of the opposing pitcher. It’s a significant improvement to the lineup.

Should both Marte and Harrison be in the lineup, it gives the A’s four hitters with a wRC+ of at least 115 compared to just two, as was the case prior to their acquisitions. Yan Gomes replacing Aramis Garcia gives the A’s one more league average hitter on their bench, and allows them to slot a 105 wRC+ hitter instead of a 57 wRC+ hitter whenever starting catcher Sean Murphy needs a day off. Andrew Chafin both improves the A’s bullpen depth by allowing them to use their previous high leverage arms in lower leverage situations, as well as serving as an elite arm to use in high leverage situations.

In a vacuum, the A’s are significantly better than they were before, and if they were in a playoff spot before, they should theoretically maintain a playoff spot for the rest of the season. But with the Houston Astros addressing their one lingering issue that was their bullpen, and with the New York Yankees already nipping on the A’s wildcard heels prior to the additions of Joey Gallo, Anthony Rizzo, and Andrew Heaney, the A’s playoff chances are murkier than ever. Their trades put them in a better position than they were before the deadline, but only time will tell if that new position is good enough for a playoff spot. 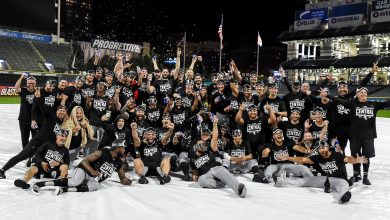