“O captain! My captain!” marked the start of Walt Whitman’s famous tribute to Abraham Lincoln following his death. The poem chronicled the United States’s symbolic ship as onlookers brimming with pride watched it come into view over the horizon. It had finally returned home. But the ship’s captain laid dead on the deck, unable to bask in the moment’s glory with his peers.

The Chicago Cubs are in the midst of a transitional period to transform their once-barren farm system into a juggernaut of phenoms. And they were in the perfect position to do so at the deadline. They were arguably the strongest sellers and had the most to offer a multitude of contenders. On the flip side, they’re departing with faces of the franchise. Players that helped rectify a team stuck in a 108-year championship drought. Perhaps no player embodies that more than Anthony Rizzo.

Rizzo, whose Cubs career stretches back to 2012, had arguably one of the best careers in franchise history. Over a decade, he slashed .272/.372/.489 and posted a 132 wRC+ and 36.9 rWAR. His rWAR total ranks 7th of any Cubs player post-integration. He also hit the sixth-most home runs and drove in the eighth-most runs in that same timespan.

As Rizzo approaches the dusk of his prime, his performance has declined with it. He slashed .248/.346/.446 with a 115 wRC+ and 1.2 rWAR in his 2021 campaign with the Cubs. He was sufficient but not playing at his peak level. The New York Yankees saw more use for Rizzo’s talents, so they acquired the veteran first baseman for right-handed starter Alexander Vizcaíno and outfielder Kevin Alcantara.

The Yankees were an ideal trade partner for the Cubs from the get-go. Their farm system flourished with impressive depth and gave the Cubs the perfect group from which to pillage. They also coveted left-handed hitters, and with Luke Voit‘s prolonged stints on the injured list, Rizzo was a desirable option.

Vizcaíno and Alcantara will join a revamped farm system that now ranks 9th on FanGraphs’s ranking. They currently fare as the 8th and 11th best Cubs prospects, according to MLB Pipeline. Despite their separation, considerable debate remains as to who’s the better prospect. FanGraphs, for example, ranks Alcantara as the second-best prospect in the system.

Vizcaíno is the most developed of the two. He was sidelined with an arm injury, only reaching Single A-Advanced at 24 years old. He struck out 26.1 percent of hitters while walking 7.8 percent in 115 innings between Single-A and Single-A Advanced in 2019.

His promise comes from a devastating fastball-changeup combination. Baseball America evaluated the pitches at 60 and 70-grade, respectively, on a scale from 20 to 80. His fastball sits at around 94-98 mph and tops at 100 with sinking action and good extension. Its potential as a power sinker makes it an attractive groundball pitch, an area in which Vizcaíno has already shown proficiency. In 2019, his 47.7 GB% ranked 30th of qualified mid-level prospects.

His changeup, however, is his most effective pitch. Its velocity sits in the low-90s—well above the major-league average of 85.8 mph—with splitting action, pairing highly well with his power fastball. It’ll derive the most swings-and-misses for Vizcaíno because, as FanGraphs’s Eric Longenhagen so elegantly put it, it “bottoms out as if a trap door has opened beneath it just as it approaches the plate.”

While Vizcaíno’s fastball and changeup are exceptional, his slider remains a work-in-progress. The Yankees worked on developing it at their alternate training site last season. Most of the improvements they made were mechanically related. Rather than change the pitch itself, they made his windup tighter to deter him from opening his body early. That helped his command, but it still has slurve-y action and grades as below-average. He developed his deadly changeup quickly, however, which could bode well for the pitch’s future.

His command may make or break his profile, as some scouts view it as his preeminent weakness. FanGraphs grades its future value at 35. Some of it is likely due to his frame. He currently stands at 6-foot-1 and weighs 172 pounds, so he could benefit from adding strength. Should his command become more consistent, he could become a starter in the MLB. If not, he could slot into the back of the bullpen nicely.

What’s most important for Vizcaíno is getting professional reps. He’s rehabbed at the Arizona Complex League already, so he’s on track to debut at Double-A soon. His established time of arrival (ETA) in 2022 aligns with his 40-man roster spot as well. That makes it crucial for the Cubs to see how he performs at upper levels soon.

Alcantara signed with the Yankees as a member of the 2018 international class, where he ranked 14th. Scouts raved about his upside in center field as he’d fill out his frame—with impressive 60-yard-dash times (clocking in between 6.4 and 6.6 seconds), high exit velocities, and quick bat speed.

Since then, Alcantara has added another inch and 35 pounds to his frame (now sitting at 6-foot-6 and weighing 205 pounds). His build has drawn comparisons to former Cubs outfielder Dexter Fowler. His speed’s currently his best tool, grading at 60 on FanGraphs and MLB Pipeline. It plays best in the outfield, where it and his height create huge, swift strides and great range.

Alcantara’s best future tool, however, is his power. His raw power’s future value, as measured by FanGraphs, grades at 70. That puts him among sluggers such as the Detroit Tigers’ Spencer Torkelson and Seattle Mariners’ Julio Rodríguez. Admittedly, their current power far outpaces Alcantara’s, but his upside is tremendous nonetheless.

Despite that daunting gap, Alcantara’s already teased his threatening power. His maximum exit velocity is currently registered at 106 mph, a magnificent feat for a 19-year-old. That figure ranks 9th among every measured minor-league player younger than 20. It also ranks 7th in the Cubs’ organization, with the youngest player above him being 21-year-old outfielder Alexander Canario (whom the Cubs received for Kris Bryant).

As Alcantara’s power develops, however, scouts have concerns about his future at center field. His speed may weaken as he continues to fill out his frame, which would inevitably hurt his range. Should he move to a corner outfield spot, his arm strength would play well at the right field. Even so, his fielding and arm both grade as plus tools long-term.

Concerns about Alcantara stem from his aggressiveness at the plate. His swinging motion, which includes a protruding leg kick, can be volatile in his plate appearances. It’s contributed to his swing-and-miss issues and presents an area of focus for the Cubs. They’ve never shied away from similar problems before, however. Jordan Nwogu, their third-round draft selection in 2020, transformed his swing in their system and slashed .289/402/.600 at A in July.

Rizzo’s departure from the Cubs was a bittersweet ending to his tenure. As the team’s implicit captain, he helped steer their ship through a rebuild, multiple division titles, a pennant, and a championship. The team’s 505 wins from 2015 to 2020 were on his back, both in his results and energy on the field. Off the field, he devoted himself to helping families battling cancer through the Anthony Rizzo Foundation. To see another player like him is rare, but to see another person like him is unimaginable.

Rizzo’s final impact on the organization may be the acquisition of Vizcaíno and Alcantara. It’d be a discouraging final note for Rizzo, whose number will remain on the back of jerseys at Wrigley Field for years to come, but their impact on reshaping the Cubs’ future could be immense. It opens the door for the next thrilling era of Cubs baseball. The next team to etch their names into the team’s rich, vast history. And that growing optimism is only going to continue gaining momentum. 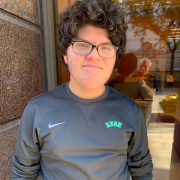