Dear All Fans about to watch the Postseason,

With the Postseason starting, ten teams are about to be thrust into the attention of national audiences more than they have been all season. One of these teams, for the fifth consecutive year, will be the Houston Astros. The hatred the general public has for this team will be on full display once again. When the Astros go to Chicago in the ALDS, they’ll inevitably be met with a rousing chorus of boos. Why the Astros are the subjects of such vitriol is well-known, and does not need to be rehashed. Instead, I would like to make one simple request of fans everywhere: before booing the Astros this Postseason, stop and think about what, exactly, you’d be doing. Allow me to explain the morality in question.

It’s worth noting my personal affiliations in this context, just to be fully honest with you, readers. I loved the Astros. The second George Springer came up, I was sold. This was the team of the future, and they were about to be very fun to watch. And I was right! They’ve made 6 playoff appearances in the past 7 years, including 4 AL West titles. They did things like putting up a 124 wRC+ as a team. I rooted hard for these Astros (well, as hard as I can root for a team, which isn’t much), adopting them as my favorite AL team. The sign stealing scandal left me feeling utterly betrayed, and for a bit I hated the Astros like most fans. Then, when the initial anger cleared, I began to think long and hard about it. I reached a new, gentler opinion. That opinion is what I would like to share.

First thing’s first: cheating is wrong. None of this will be an argument about that. I do not condone banging on trash cans or stealing signs through electronic means. Rules were in place against this, and rules are in place for a reason. Even putting that aside, Mike Bolsinger happened. The Astros’ actions were wrong.

I’m as online as the rest of you, maybe even more so. I know the reasons Astros homers use for why people shouldn’t hold the banging scheme against the team. These are not my argument, though I will briefly address some of the main ones. The hypothetical denizen of Astros Twitter would say their actions were fine because there’s no real evidence they even helped. Well yes, that’s true, but a breach of morality is judged upon the process, not the result. Similarly, they’d say 2019 (for now let’s assume there were no buzzers) and 2021 prove the Astros were just as good without cheating. Another true statement, but it doesn’t mean they still didn’t cheat. Now desperate, the Astros fan would probably say something about being a scapegoat and opening the letter. I’m a reasonable person. I know there was no way the Astros were the only team cheating. I’m sure all of you know it too. That doesn’t change the morality though. The rules were still broken, whether one team broke them or every team did. So no, stereotypical Astros fan on Twitter dot com, none of your justifications for your team are valid. They might be, and likely all are, true. But they doesn’t make what they did right.

From what I’ve said so far, you would think I’m fully in support of booing the Astros. I did just take a whole paragraph shooting down reasons not to be mad at them. It’s at this point that I’d like to make a distinction: I have no problem whatsoever with hating or booing the Houston Astros as a team because of the banging scheme. I personally don’t hold that viewpoint—I find it difficult to have strong feelings towards teams as a whole—but if you do I understand. What I would like everyone to question is hating the individual players.

See, when the Astros go to New York or Los Angeles and get booed heavily, Kyle Tucker, to name one, is usually exempt. Tucker wasn’t on the 2017 team, so opposing fans don’t care about him, and instead save their wrath for Jose Altuve, Alex Bregman, and Carlos Correa. If fans hated the team, which is fine, they’d boo everyone. Clearly they hate the players instead. And I know what you’re probably thinking, that the sign stealing was a player-orchestrated scheme, so of course the individual players should be hated for it. It’s here that I’m actually going to agree with public opinion. Virtually everyone believes that the scheme was the brainchild of Carlos Beltrán and Alex Cora. Therein lies the key to everything I believe.

So Beltrán and Cora decide to put the banging scheme in place. By my estimations, that leaves the other players on the team with five options. First, they could have immediately told the league about this plan and squelched it before it really started. But come on. Name one player in the league who actually would have done this. Name one person you’ve ever met who would’ve done this. I certainly wouldn’t have, and if you’re honest with yourself, reader, you wouldn’t have either. There is a second, less extreme version of this option. That would be to tell a higher up within the organization to have them stop it. I ask again, would you do this? Beltrán and Cora were, the most veteran player on the team and the bench coach, respectively. I’d be scared to cross them, and you would be too. Which rules out the third option as well, that of talking to them directly. Maybe that happened. Maybe a player or two did talk to them. But they’re team leaders, and thus intimidating figures. There’s no guarantee asking them to stop cheating would make it happen, and it’s much more likely that instead, you’d just make enemies of your team leaders. You can’t possibly hold not taking any of these three courses of action against anyone on that team.

I did say five choices, and only covered three. That leaves us with two more by my count. These are the two that people actually did, at least as far as we know. One of them, obviously, is to go along with the scheme. The logic here is very easy to understand. It’s something along the lines of: my teammates set up something they think might be helpful, and hitting is hard; if this is here I might as well try it. That seems to be what almost (I’m getting to the exception) everyone on the team did. They either knew or suspected there was nothing they could do to stop the banging, no matter how they felt about it, so why not take advantage? Isn’t that what you’d do after all? If you had the option to make your extremely difficult job even a bit easier, wouldn’t you use it? Especially if you knew there was nothing you could do to get rid of it?

If you’re someone with more of a moral hard line when it comes to unfair advantages, that last option wasn’t for you. But this final one is. We’ve already established that there was effectively no choice for players that involved stopping the trash can banging. But let’s say you’re a player and you either morally disagree with cheating, or you simply don’t find the scheme helpful. Well then you can’t stop its existence, but you can choose not to use it. I think that’s what I would do. Those of you who didn’t answer yes to my questions in the previous paragraph, it’s what you would do too. And it’s what far and away the most hated 2017 Astro did. Let’s talk Altuve.

By all accounts, including the interviews players had with the league investigators, Altuve wanted no part of the banging scheme. The data supports this, with Altuve receiving the lowest amount of bangs per pitch of any Astro who saw at least 25 pitches in 2017. If he didn’t want it and didn’t use it, why is Altuve the face of the scandal and so disproportionately hated for it? Well, there are auxiliary reasons pertaining to him specifically. Altuve famously won the 2017 AL MVP over a very likely more deserving Aaron Judge. Holding that against Altuve is absurd—he isn’t the one who gave him the award—and most people seem to realize this. That’s not why he’s the one singled out for hate. Nor is the reason the still-ongoing-for-some-reason buzzer debate. There has never been any non-anecdotal evidence for buzzers, meaning rational fans no longer believe it was ever a thing (aside: the rise and credibility given to a nauseous conspiracy theorist like Jomboy is one of the biggest negatives to come out of the scandal). That isn’t why Altuve is hated either.

No, Altuve is hated for the same reason his teammates are. He just happened to be on the team that cheated. And Altuve gets the brunt of it because he was that team’s best and most well-liked player.

So don’t hate the individual players left from the 2017 team. It’s coincidence that they happened to be there. The cheating would have happened with or without them, and there was nothing they could do about it. They were in a situation, and did what anyone would’ve done. Don’t hate them for their circumstances. Go ahead and hate the team; Lord knows they deserve it. The organization has done far worse things than hit a few trash cans. So boo away if you’d like. But if you boo, make sure you’re booing the team. Boo all the players for the name on the front of their jerseys. Just don’t direct your ire at the names on the back who, through random chance, wore that front name in the wrong year.

P.S. Don’t encourage throwing at the Astros either. All the same reasons apply as did with booing, plus, it’s not their fault MLB’s punishment for them was too light. You know what, don’t encourage throwing at any players for that matter. That’s way worse than sign stealing. It’s literally assault with a deadly weapon. It should be a criminal charge. Don’t cheer when your team does it. 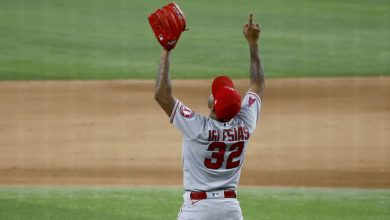 Watching From Afar: Baseball’s Brightest Stars Miss Out on the Playoffs…Again Sean is a psychology major and mathematics minor in his senior year at Fordham College at Rose Hill. He is a lifelong baseball fan with a nominal affinity for the Phillies. You can follow him on Twitter at @srhkthew2 for occasional comments on baseball and assorted esoterica.
Find Us on Social Media
Popular Articles
Facebook Twitter WhatsApp Telegram
Back to top button
Close
Recent Posts
Meta
Meet the Team
Close
Close
Log In