The Los Angeles Dodgers and the Miami Marlins agreed to a trade last week that will return infielder Miguel Rojas to Los Angeles where he made his MLB debut in 2014. In exchange for Rojas, the Dodgers sent Jacob Amaya to the Marlins who ranked as L.A.’s 15th-best prospect according to MLB Pipeline.

With the Dodgers losing shortstop Trea Turner to the Philadelphia Phillies in free agency earlier this winter, some speculate that Rojas will take the reigns at shortstop, the position he played during all 132 of his games started with the Marlins last season. However, as Jonathan Hoffman mentioned in his offseason review of the club, Los Angeles is looking to incorporate more of their young, homegrown talent to plug the vacancies of outbound free agents.

The 33-year-old Rojas will likely battle for playing time at shortstop and third base with players such as Gavin Lux, Max Muncy, and Miguel Vargas. Although Rojas is not the most imposing threat at the plate, he’s shown the ability to avoid swings and misses throughout his career, ranking within the top 8% of hitters in whiff rate last season. Limiting strikeouts is something Rojas excels in, which will make his case for a consistent spot in the starting lineup interesting.

Beyond his numbers at the plate, the primary allure of Rojas is his defensive play. According to Baseball Savant, Miguel Rojas recorded 12 outs above average last season, the fifth-highest mark of any shortstop in baseball. It is worth mentioning that prior to being traded away in 2014, Rojas made a highlight-reel defensive play in the seventh inning of Clayton Kershaw’s no-hitter on a ball that may have ended the magic that night had a less-polished fielder been in the game at third base.

RosterResource provided by FanGraphs currently projects Rojas as a bench depth option for the Dodgers, listing Gavin Lux as the team’s starting shortstop. Lux has grown significantly in his approach at the plate since making his Major League debut in 2019, which makes the 25-year-old a no-brainer for the team’s starting lineup. In 2022, Lux posted a career-best .328 wOBA while leading the NL in triples.

The role Hanser Alberto played last season may lend itself to Rojas in 2023 as the 30-year-old utilityman agreed to a minor league deal with the Chicago White Sox this offseason. Alberto appeared in 73 games for the Dodgers a year ago, logging innings at seven separate positions.

In all, should Rojas see considerable time at shortstop, his role with the Dodgers will be as a stop-gap player. With Michael Busch, L.A.’s 4th-ranked prospect, set to make his MLB debut this season and Rojas’ two-year, $10 million contract expiring at the end of 2023, it is safe to say that Miguel Rojas’ reunion with the Dodgers will go as far as he can aid the team in going as a depth piece this season.

A Maryland native, Arrick is a lifelong Dodgers fan who has always ignored the time zone difference. Arrick is an avid coffee drinker, R&B fanatic, and will win your fantasy football league. Follow on Twitter and Instagram: @ArrickJoel. 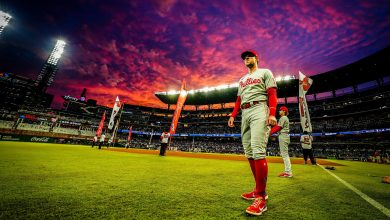