Baseball is a game of trends. Many would say that in 2018 we are in the era of the home run and the strikeout, and there are statistics to back that up. However, this didn’t come out of nowhere. Baseball has been trending this way for years and it is unlikely that it will flip on its head come 2019. Knowing this, its hard to find a true outlier because there has to be a lead up into it and a slow decline following it. We’re looking for a sudden shift in a game of slow change.

The best place to find extreme statistics is always the dead ball era. Fortunately, we can find some laughable league statistics if we go back far enough. From my statistical analysis, I can confidently say that the largest statistical outlier year in MLB history is 1894. 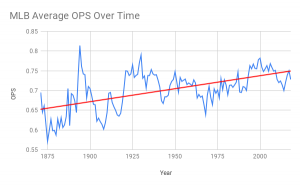 OPS is a good single statistic to use in order to gauge general offensive productivity. Our job, for all intents and purposes, is to pick the steepest spike on this graph. There are certainly some hills and valleys, and we can see that there was generally more inconsistency in baseball’s early days, which makes sense. A notable upward spike came in 1930, a relative outlier. In 1968, the year after which the pitcher’s mound height was decreased, we can see a large divot. However, the skyscraper that stands above them all is, you guessed it, 1894.

The exact league average OPS comes in at .814, by far the highest mark ever and the only to ever exceed .800. The only other year to ever come close to .800 was in 1930, when the league mark .790. The years surrounding 1894 are also very hitter-friendly, but in 1894 the offensive numbers jumped into orbit, although not exactly in the way we would visualize that today. Hugh Duffy, who we’ll get to more later, led the league in OPS at 1.196. That is a Barry Bonds type mark, but without the steroids. That alone looks impressive, but put into perspective that the average OPS in 2004 (Bonds had an OPS of 1.422 this year) was .763. To say that Duffy’s numbers were a result of the era in which he played is a completely valid statement, and the inflation of his statistics in this year particularly rivals that of post-WWI Germany. To add some more perspective, maintaining a batting average of .400 is something that is mostly considered to be impossible at this point in baseball. Tony Gwynn almost made history in the strike shortened season of 1994 by barely missing the mark. Not just one, but four different players passed that threshold in 1894.

Although the offensive statistics are impressive, there is another side of the coin. The pitching in this year was so horrendous that it becomes exponentially less surprising that it rendered these video game type offensive numbers. ERA seems like the obvious way to go for this one, and I promise it is not pretty. 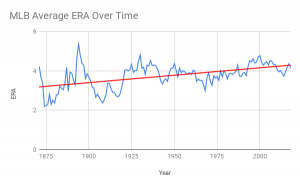 This year alone is responsible for the necessity of the entire top sixth of this graph. As exemplified by the trend line, league average ERA does not change drastically over time, staying within the high 3’s and low 4’s for all of baseball history. It’s because of this consistency that I actually redid this graph three times; it just doesn’t seem right. Mostly every other year maintains someone of a correspondence to the trend line, while 1894 uses it as a great 8ft trampoline which was quite fun.

The exact league average ERA for that year was 5.33, again by far the highest of all time and the only one ever above 5.00. In 2018, there were 39 qualified pitchers with an ERA lower than 4.00. In 1894, there were four players who accomplished this feat, and only one who had an ERA lower than 3.00. The league leader was Amos Rusie, with an ERA of 2.78. How did Rusie put up a respectable season (ERA-wise) by today’s standards in the most prolific offensive year in history? The best answer is that he got pretty lucky, and got out of a lot of jams. Rusie finished with a WHIP of 1.41, which also happened to be a league best. At least today, an ERA to WHIP ratio like that is unheard of. Miles Mikolas has a similar ERA to Rusie in 2018, yet had a WHIP of only 1.07. Rusie certainly would have won the Cy Young award this season, if the bearer of the award’s name was not only four years into his career.

There are a few details about this year that make it all the more interesting. The first is that this was one of the rare years that rendered a triple crown winner. In a year where everyone was getting an extreme statistical boost, one man still found a way to lead the league in virtually every offensive category. That man is the aforementioned Hugh Duffy of the Boston Beaneaters (the franchise now known as the Atlanta Braves). Duffy posted a whopping batting average of .440, the highest mark ever (most sources do not recognize Duffy for this achievement because it occurred during the dead ball era). He also finished with 145 runs batted in, which would lead the league in most modern years. If today is the era of the home run and strikeout, this was the era of everything in between. Duffy led the league with 18 home runs, which was a statistic that remained stable in this outlier year. The league leader in strikeouts this year only posted 73 K’s, as opposed to multiple guys breaking the 200 mark in 2018.

The other interesting detail of this year was Philadelphia’s Billy Hamilton. Hopefully you first confused him with Billy Hamilton of the modern day Cincinnati Reds (now a free agent, however). The two, although more than a century apart and not blood related in any way, have a striking statistical comparison. 2018 Billy Hamilton is mostly thought of as a speedster who is good with a glove, and not so good with a bat. 1894 Billy Hamilton is two of those three things, as he posts very impressive offensive numbers to go with his phenomenal speed and work in center field. 1894 Hamilton swiped 98 bags to lead the league by 20, which could be a possibility for 2018 Hamilton if he was on base more often. 1894 Hamilton was on base a lot, leading the league in walks an in OBP. We can attribute much of the offensive success of 1894 Hamilton to the era in which he played, so I like to think that 1894 Hamilton is what 2018 Hamilton would be, had he played in 1894.

I am a college student originally from Shaker Heights, Ohio. I am both a fam of and primary cover the Cleveland Guardians. Follow me on Twitter: @xwOBA