As reported late Sunday night, the Philadelphia Phillies have acquired SS Jean Segura from the Seattle Mariners for a package around 1B Carlos Santana and SS JP Crawford. (UPDATE: relievers Juan Nicasio and James Pazos are also headed to Philadelphia in the trade)

The Mariners Perspective: After finishing in 3rd place in the AL West, Seattle has committed to a complete tear down acquiring prospects for proven stars like James Paxton, Robinson Cano, and Edwin Diaz. This trade is no different as a young player, former top prospect, is now viewed as a piece to help win down the line instead of guys who can help win now. Through Ken Rosenthal, an MLB executive agreed that, “by 2021 they can be really good. Lots of money will be off the books by then. And they’ll have higher draft picks the next few years.” (The Athletic). Carlos Santana is a piece to play right now for the mariners, but the hope is to eventually trade him at the deadline if he plays well. Using Fangraphs steamer projections, in 2019 alone, Crawford is projected for  a .322 OBP, which is not to far off Segura’s projection of a .324 OBP. While these projections are not the most reliable and are usually conservative, it can provide prospective that the Mariners may not lose that much on the offensive side while gaining some defense on a player who is 5 years younger. Not to be overlooked, the M’s also receive close to $25 million dollars in salary relief, even when taking on Santana’s contract. 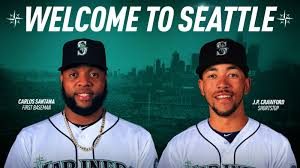 The Phillies Perspective: This trade is a lot more interesting for the team on the east coast, as the trade not only helps the team right now, but provides numerous options for flexibility. Adding Segura’s bat, around a .300 AVG and a 113 wRC+ can massively help a position that was worth around -2.5 WAR last year and he alone could provide a 5-6 win improvement from just last years team, which is only starting to improve. Pazos and Nicasio are both upgrades in the back end of the bullpen, or allow the team to trade vet Tommy Hunter, who dissapointed after signing a big deal last off-season. Although Nicasio had a 6.00 ERA last year, his underlying numbers were good, such as his 11.36 K/9 and 2.99 FIP, and could prove an important arm in the pennant race. 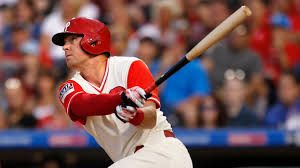 Most importantly, the trade allows franchise cornerstone Rhys Hoskins to move back to his natural position of first base and gives the front office countless ways to position the roster for 2019 and beyond. There is no doubt the Phils are going star hunting and acquiring Manny Machado’s friend, and country-mate, should be viewed as a good things for the player and franchise. Machado has been an inconsistently good SS defensively speaking, but at the position he started at in the big leagues, 3B, he was one of the best in the game and a perennial gold glover. Money convinces people more than anything, and while Machado has said he would prefer to play shortstop, would a slide over by 50 feet be worth it over potentially an extra 50 million dollars. This trade allows the Phillies at this exact moment to upgrade 4 positions, and possibly 5 (Machado), while giving up on a player who has not fulfilled expectations and only under control for one more year than Segura in Crawford, along with Santana, a front office mistake.

Bottom Line: While Jerry Dipoto probably has higher hopes for JP Crawford than most, the Phillies have to come away clear winners due to the clear upgrade at not only SS, but across the lineup and adding much needed flexibility to  an off-season with possibilities that run the gamut.