Baseball has always been a sport that prides itself on tradition.  The game has never been known to adapt or change very easily.  I can still hear my old high school coach’s voice barking the reasoning behind certain things we would do: “because that’s the way it’s been done for 100 years!”

Like it or not, evolution has come. It’s undeniable that the way the game is played has changed incredibly over the past century—with immense changes coming even in the past 10 to 20 years. Offensive strategies, specifically, have evolved to a point that have left old-school fans and coaches alike shaking their heads in disgust. With power being prioritized above all else, changes to the way lineups are written have slowly become the new norm in Major League Baseball.

Since the game began, the strategy behind a manager’s lineup would look something like this: fastest guy in the leadoff spot, a savvy bat-control type hitter in the two hole, your best all-around hitter third, and your biggest power threat goes fourth, in the cleanup spot, to drive everyone in—and so on from there.

In recent years, analytical thinking has taken over the game and, as a result, we’ve started to see some changes to that old-school lineup approach.  Managers have been inclined to put some of their better hitters in the leadoff or two-hole, in order to maximize their potential opportunities.

For context, just nine years ago, there were exactly zero hitters who would have met that criteria.  This decade has been revolutionary in terms of the effect analytics has had on influencing manager’s lineup decisions.

Atlanta Braves manager Brian Snitker began the 2019 season with the explosive Acuna Jr. in the cleanup spot.  The powerful right-handed hitting outfielder seemed to be an old-school baseball manager’s lock to hit behind the left-handed Freddie Freeman.  Atlanta’s offense sputtered through the first few weeks of the season, and the Braves found themselves with an uninspired 18-20 record in early May.

It was on May 11th when Snitker, seeking a spark, put Acuna Jr. in the leadoff spot.  Snitker and the Braves never looked back, as Atlanta sprinted its way to a 79-45 record the rest of the season on their way to a NL East division title.  In the first 38 games before Acuna Jr. was moved to the top of the order, the Braves offense produced an average of 4.8 runs per game.  From May 11th on, the Braves upped that to 5.4 runs per game.

While that, admittedly, is an isolated sample, it is undeniable that the Atlanta lineup was more productive with its young star setting the tone at the top.  All in the name of winning baseball games, Snitker and other big league managers have shown a willingness to adapt and experiment to ignite their offenses.

My question is, even with all these seemingly dramatic changes to lineups, have we found the most effective and efficient model for run production?  I have some potential ideas (theories) about how teams could maximize productivity in a lineup, one through nine.

The name of the game is scoring runs.  Based on Greg Stoll’s Win Expectancy Finder and Expected Runs per Inning Formulas, one of the most important scenarios that an offense can capitalize on in order to increase their chances of scoring, is having its leadoff hitter reach base.

According to the formula, at the start of any given inning, the offensive team has a 14.65% chance to score at least one run.  Based on what that leadoff hitter does, a major variation in potential outcomes occurs.  If your leadoff hitter reaches first base to begin an inning, your potential run expectancy in that inning rises to 18.13%; however, if your leadoff hitter is retired, that percent will drop to just 9.36%.

To those who are not fans of mathematics, that means you are roughly twice as likely to score in an inning when your leadoff batter reaches base-rather than if he were to make an out.  So what does that tell us?  Hopefully our best on-base percentage guys lead off innings?  We don’t really have control over that fact, outside of the first inning.  But can we attempt to manipulate our lineups to be conducive of these facts?  Potentially.

So in order to put our lineup in the best position, statistically, to score runs, we should put one of our highest on-base percentage hitters in the lineup position that statistically comes up to lead off the most amount of innings.  Leadoff hitter with a high on-base percentage, you say?  Not exactly revolutionary, but there is the data that supports that idea.

Conversely, knowing that your second and third place hitters will lead off the fewest percentage of innings, we need to identify which kinds of hitters we would not want leading an inning off—in other words, hitting with the bases empty.  Again, not rocket science, but your big run producers are typically ones who you would want up in those situations.  Your Christian Yelich’s, Mike Trout’s, Alex Bregman’s—guys you want coming up with guys on base to drive in.  Your traditional third and fourth place hitters.  Statistically, your second and third place hitters actually will have the greatest opportunities throughout the course of a season to hit with runners on base.

Most teams will be able to identify at least two potential run producers to slide in these slots, those lucky enough to have a third would ideally slide into the cleanup spot.  Now we get into how we would want to stack our hitters throughout the rest of the lineup.  Traditionally, big run producers are not the fleetest of foot.  Stacking these power hitters together would be beneficial because they would be given the best chance of being driven around the bases easily via the stronger likelihood of extra base hits occurring.

The rest of the lineup, would essentially be an altogether new five-man lineup.  In most cases, the five through nine spots in the order won’t provide the same thump as your top four.  For this reason, I would be inclined to put one of my better base running threats in the fifth and/or sixth spot.  With hitters occupying the seven, eight, and nine spots in the order who typically will not be the most dangerous, having those better runners in the fifth and sixth spots could give you the opportunity to create more runs by means of their better athleticism and base running abilities, as extra base hits will be relatively scarce.  To me, these speed guys could be more valuable in creating runs with their legs in the middle of the order as opposed to the top.  I always thought it was a bit of a waste when a guy who steals 50 bases was hitting in front of a guy who hits 50 home runs.

As far as the seven-to-nine slots, I would look to basically stack them in order of their abilities to get on base and extend an inning.  I am inherently against the idea of necessarily placing a relatively productive speed oriented hitter in the nine hole just for the purposes of having a “second leadoff hitter”.  Remember, ideally, you want that guy in your leadoff spot to lead off as many innings as possible.  Your weakest starting hitter should hit ninth, with the expectation that he will be making outs at a higher degree than anyone else—they might as well potentially end an inning and result in another leadoff opportunity for your best on-base guy.  If anything, your “second leadoff hitter”, may have a bigger impact serving as the leadoff hitter for the bottom of your order.

So what would a potential lineup look like?  Let’s stick with the 2019 Braves and see how their lineup would potentially be constructed when applying these ideas.  We’ll use a DH to avoid including a pitcher.

Definitely has a strange look to it.  I would be interested to see what kind of production that lineup would have over an extended stretch.  There would be multiple ways for it to shake out, but I liked Donaldson in the leadoff spot with his high OBP and 100 walks.  Freeman would have been a potential leadoff candidate as well after posting a .394 OBP over the past four seasons. With that being said, I’d prefer Freeman to hit with runners on base as often as possible, not only for his run production abilities, but also to prevent defenses from fielding a full shift against the big left-hander.  Acuna Jr. and Freeman provide you with significant run production after combining for 79 HR in 2019, not to mention Albies following that pair in the fourth spot with a strong .500 slugging percentage last season.  I love Albies protecting Freeman as a switch hitter who dominates from the right side, along with doubling as another dynamic baserunner while turning the lineup over to the bottom half.

Swanson and Inciarte are the prototypical athletes I’m looking for to kick off my “second lineup”.  Their offensive skills and base running abilities lend themselves to creating run-scoring opportunities for the weakest third of the lineup.  I like Markakis’ abilities to put together good situational at-bats and execute what needs to be done with the potential of Swanson and Inciarte on the bases in front of him. The bottom of the Braves lineup presented many left-handed options, I went with Duvall over Matt Joyce to get another right-handed bat in there.  Duvall and McCann would be relative threats out of the bottom two spots, and ideally set the lineup up to start fresh at the top throughout the game.

I’m a believer that a team’s offensive output will have higher levels of efficiency when there are players who complement each other working together in a lineup in order to maximize their abilities to create runs.  While the old-school lineup had its strategic place in decades past, managers and front offices have conceded that it simply does not put their teams in the best position to score runs in today’s game.  I think the changes that we’ve already seen have the potential to be only the tip of the iceberg—and teams will continue to utilize statistical analytics to optimize their offensive efficiency.

Regardless of whether or not this specific lineup idea would ever be utilized in a Major League game, what is exciting is that teams seem more willing than ever to try new things to go against the grain in the name of scoring runs.  I think we can all agree that this era of evolution in Major League Baseball has just begun, and we should be extremely excited to see where this next decade takes us. 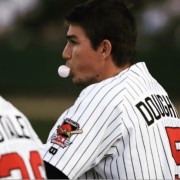 Florida native who's life has revolved around baseball since the mid '90's. Led the Dodgers to a mini-dynasty from 2001-2004 at Central Sarasota Little League, played at Sarasota High School, collegiately at Florida Tech, and had a brief (unspectacular) stint professionally with the Fargo-Moorehead Redhawks of the independent American Association.