Earlier today, the Chicago White Sox announced that their 2020 first-round draft pick, left-handed pitcher Garrett Crochet, will be joining the major league team. Crochet is the first member of the 2020 draft to be placed on a team’s active roster, and the first player to be called up in the same year he was drafted since Royals lefty Brandon Finnegan did it in 2014. Here is my pre-draft scouting report on Crochet, which should give you an idea of what you can expect from the former Tennessee Volunteer.

A tall, lanky lefty, Crochet possesses a lethal fastball/slider combination with a changeup that has flashed above-average potential as well. Crochet runs his fastball into the high-nineties and occasionally gets into the triple digits. Crochet’s lower arm slot and extension allow that fastball to come from a flat vertical approach angle, which makes the pitch tough to connect with-up in the zone. Crochet’s slider is his put-away breaking ball, with heavy transverse sweep coming out of that low arm slot. His future role will likely dictate his changeup usage, as the fastball/slider combo should suffice out of the bullpen, but the change has the potential to an average or better potential if he shows the commitment to throwing it a little more than he did in college. The main question I have with Crochet is command. He does a solid job of throwing strikes, but the area where he needs to improve is locating within the strike zone, particularly with that nasty slider. Too many times at Tennessee he would miss badly with the pitch, allowing it to get whacked. If located on a more consistent basis, his future role looks a lot more promising as a #2-3 starter.

Overall Crochet’s nasty stuff should put him on an accelerated track to the big leagues, and his command is what will dictate his role once he is there. 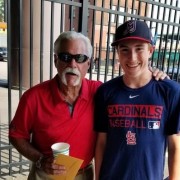