The NFL Draft is one of the most anticipated events of the sporting calendar. The top college prospects’ ability to step in and play right away and help their new team means fan analyze (and over analyze) every move. Recently, the 49ers traded a haul of future first round picks to move up to #3 in this week’s NFL Draft. A GM can put themself on the hotseat in a hurry if they choose the wrong guy. The Bears infamously took Mitch Trubisky over Patrick Mahomes after moving up a spot in the draft. In 2016, the Rams traded a bevy of picks for Jared Goff, who is no longer with the franchise. These moves are highly consequential in the NFL, and fans accordingly get very invested in the draft. MLB should absolutely do whatever they can to capitalize on similar fan fervor.

Vanderbilt co-aces Kumar Rocker and Jack Leiter are considered the top two college pitchers in the 2021 draft (and likely the first two players selected). However, under the current system, a team outside the top two couldn’t trade up for one of them even if they wanted to. Baseball is missing out on a major opportunity and should follow the lead of the other sports by allowing teams to trade draft picks ahead of the first-year player draft.

Presently, MLB limits trading of draft picks to the exception of competitive balance picks. These draft picks are awarded to the smaller market teams and can only be traded once by the team they are awarded to. Expanding draft pick trading is an easy way to increase fan interaction and gives the pundits plenty to talk about for years to come.

With the MLB Collective Bargaining Agreement set to expire, changes to the draft are already starting, with the draft being shortened to 20 rounds. Trading multiple picks could soon follow and become a reality, but what could it and should it look like? For starters, it’s not exactly apples to apples when looking at NFL or NBA picks and MLB picks. Top college players in the NFL and NBA draft are expected to contribute immediately. Even the most polished MLB draft picks can expect to spend at least a year or two in the minors before contributing at the highest level.

The fear among the powers that be in MLB is that teams will mortgage their future and trade all their picks in exchange for a short-term fix. It’s the same reason the NBA instituted the “Stepien Rule” that essentially prevents teams from trading their first-round picks in consecutive years. There are also rules that prevent trading picks beyond seven years in the future. MLB would be wise to take some similar safeguards.

I would suggest limiting the ability to trade draft picks no more than five years in the future. Also, with a 20-round draft seeming more and more likely to stick in the future, it seems like the best course of action would be to limit the tradable picks to the first 10 rounds. These rounds are subject to the draft bonus pool dollar amounts and have a direct impact on team’s ability to sign players. If you wanted to get even more aggressive, you could limit tradable picks to the top 5 or even top 3 rounds. This would allow teams to still have picks left to restock their minor league teams, albeit without the top end talent you’d expect to find in the earliest rounds.

Furthermore, it could also lead to an increase in in-season trades. Currently, if a player is traded mid-season, they are unable to receive a Qualifying Offer (this allows the team losing a top free agent to receive a draft pick as a way to offset the loss of that top player). If teams were able to trade, say, 5th round picks for bench pieces or players that weren’t likely to receive a qualifying offer, there could be a flurry of action at the deadline that would allow teams another path to compensation for impending free agents and cut down “losing a player for nothing.” Baseball would need to work out contingencies for what would happen if a team traded for a pick and then failed to sign the player they selected with that pick, but they already have the groundwork in place for failing to sign top picks in place so that shouldn’t be a huge roadblock.

Would the Pirates dare trade the #1 pick even for multiple future first round draft picks?

Teams with strong scouting would be able to target “their” guy and move up in the draft if they deemed it worth it. This would reward teams who are confident they can draft an elite big league player. Would a team in need of elite pitching talent pay a princely ransom to move up to secure a top talent like Rocker or Leiter? Would a team like the Pirates really be willing to part with the number one pick even if it meant getting multiple first round picks back? It would be a bold move on both parts. A move like this would have drastic implications for both teams and a potential ripple effect throughout the league.

The 49ers decision to go all-in by trading three first round picks for the #3 pick in the NFL draft has created plenty of buzz and will likely be one of the most heavily scrutinized decisions for years. Allowing baseball teams to trade their picks would generate a similar level of discussion and inject some life into the MLB draft that it is currently lacking.

The 49ers may not regret their choice at #3, but MLB will regret missing out on the engagement and excitement allowing teams to trade would generate. It’s time to trade in an outdated system for a new and more exciting one.

Ryan is a lifelong Dodger fan and a recent adopter of the LG Twins. You can follow him on Twitter at @ryanriff36 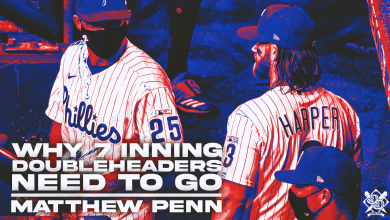 Ryan is a lifelong Dodger fan and a recent adopter of the LG Twins. You can follow him on Twitter at @ryanriff36
Find Us on Social Media
Popular Articles
Facebook Twitter WhatsApp Telegram
Back to top button
Close
Recent Posts
Meta
Meet the Team
Close
Close
Log In