There were plenty of talks about who the X-factor on the Angels staff is and the Angels pitching staff in general before the season, and Andrew Heaney was a main focus in those talks. Heaney has always been a guy that shows flashes of being really productive, but has not quite put it together. But in his contract season, a critical point in all players careers, he has flashed why we should not give up on Andrew Heaney just yet.

The big improvement thus far for Heaney has been his ability to get swings-and-misses and strikeouts better than ever before. So far in 24 innings this season, his K% is up to 35.1% on the season. His previous career high was just under 29% in 2019. His 5.25 ERA up to this point is not real exciting, but with an xERA of 3.31 and a SIERA of 3.03, Heaney has been better than that ERA would tell us. So what is it that has been encouraging for Heaney that should intrigue people? His usage of the four seam fastball up in the zone.

The results on the fastball have been mixed, as he is allowing a not so great .334 wOBA on his fastballs this season. That number was certainly significantly better before his Friday night outing, when the Mariners took him deep three times off the fastball. Heaney has used that pitch almost 56% of the time as well, so while it is a bit improved from last season the results still are not great. However, his obvious intention of locating his four seamer up in the zone more this season has set up his secondary pitches well along with getting more whiffs on the fastball itself. So far his four seamer has a Whiff% of 29.8%, while last season it was at 24.8%. The jump in swings and misses like this one below have been really evident when you watch him.

This fastball has seen a slight velocity bump of about one tick from last season. The movement profile of the pitch compared to similar pitches is also really impressive this year. Heaney gets 14.8 inches of horizontal movement on his fastball, which is a really good amount of break for a fastball with his velocity and release. His fastballs movement horizontally was really good last season, and he added another inch of horizontal break to it this season. In every start of Heaney’s this season, his use of the upper part of the strike with his fastball has jumped out. Below is his fastball location map in 2018, his best season yet. 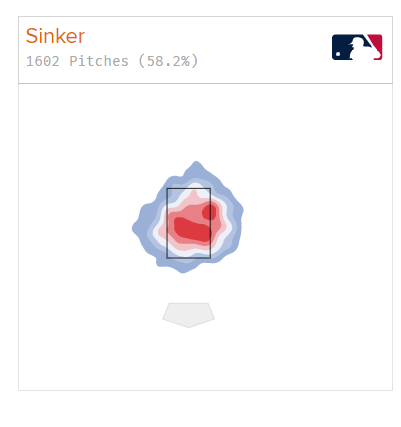 Baseball Savant use to classify his fastball as a sinker, but either way that is a pitch located in the heart of the plate. The location of those pitches show a pitcher that is trying to pitch to contact. This pitch had a Whiff% of just 20.2% and allowed an wOBA of .355. On the season, Heaney had a 4.15 ERA and a 3.74 SIERA in 180 innings that season. But this year so far, his pitch map looks very different. 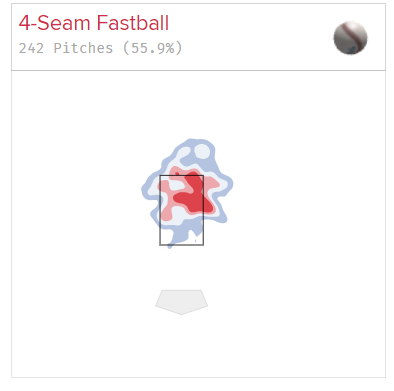 Heaney went from peppering his fastball in the middle of the zone while looking for soft contact to inducing swing and misses. He is getting hit harder as a sacrifice, but the sample size is extremely small to look at exit velocity. There has been a lot of time, of course, between this season and 2018, but looking at how significantly the approach has changed from the rest of his career to this season is still interesting. It is evident that Heaney came into the season with the goal of elevating his fastball to get more misses, and it should help him in a positive way. That includes his ability to play off of the elevated fastball with his two secondary pitches.

Heaney has used his curve almost 26% of the time, and it has gotten incredible results. The curveball has a 43.8% Whiff% and a .175 wOBA thus far. The amount of batters that have given a weak swing at a curveball way out of the zone has been fun to watch. On the other hand, Heaney’s third pitch is a changeup that has allowed a .302 wOBA. His changeups do not get the same amount of misses, but it has been his most effective two-strike pitch by a little bit. There has always been a strong argument for Heaney to rely on his secondary pitches more, and that still may be a thing this season. 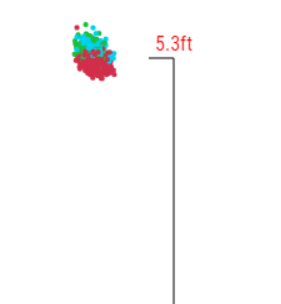 Tunneling helps pitchers look even nastier than they are, which seems to be the case for Heaney. More specifically, it seems to be a huge aspect of why Heaney’s curveball has been so impressive this season. Getting batters to chase at pitches way out of the zone typically means you fooled them on the pitch, which is what Heaney has been doing this season. Just on its movement profile allow, the curve has below average movement both horizontally and vertically when compared to pitches with similar velocity and release point. But as mentioned before, hitters have been dominated by the pitch so far.

Heaney outings this season, other than his starts against Chicago and Seattle, have been very entertaining because he is fooling hitters more than ever. Even in the Chicago outing he had a run at the start of the game that was pure dominance. For a guy that lives inside the strike zone and on the edges of the zone more than most starters, it will be exciting to watch Heaney continue to attack the top of the strike zone this season and play off of it from there. The results have been up and down, which is more emphasized to viewers because that is what Andrew’s whole career has been, but there is legit hope that can put together a really nice season this year. Heaney has been with the Angels for a long time and endured a lot of bad seasons, so it would be awesome if he could put it together while the Halos arrow starts to trend upwards. And if there were ever a year for Andrew Heaney to break out, the year before his free agency seems like a good year to pick.