While far from the most important thing 2020 took from us, baseball games were still something that we missed in the tumultuous year that was 2020. Thankfully, ballparks across the nation have been opened up to various degrees to start this season, whether it be at 12% capacity, such as Fenway and Nationals Park, or 100% capacity such Globe Life Park in Arlington. Here in Los Angeles, Dodgers Stadium was allowed to open at 20% capacity. As a person who grew up going to as many as 20 games a year, I was curious as to what it’s like to go to a baseball game in the middle of a global pandemic and, more importantly, share what the experience was like with everyone as well.

The game I decided to attend was Tuesday, April 27 against the Cincinnati Reds, mainly because Walker Buehler was starting that night and he is my favorite player on the team. It was important for my family and me to get to the stadium early in order to see the work that Janet Marie Smith did renovating the stadium. We arrived at the stadium and were immediately greeted by the same long lines of cars that greet fans trying to enter the stadium parking lot and a local vendor, who instead of selling tee shirts, was selling masks and neck gaiters. The parking process was more streamlined this time. Since all parking had to be paid for in advance, it was a simple scan and we were quickly directed to where we would be parking. The presence of fewer cars allowed for a much quicker and easier walk to the stadium.

It should go without saying, but you should definitely enter through the new centerfield entrance, where you will be immediately greeted by the Jackie Robinson statue, moved from the left-field plaza on the reserve level, and be awestruck by Janet Marie Smith’s incredible work. The entrance is truly beautiful and the centerpiece that Dodger Stadium has truly been missing. There are plenty of photo opportunities once you enter the stadium, whether it be with the Tommy Lasorda bobblehead or a large replica of the Commissioner’s Trophy. The lines may look intimidating, but they are much shorter than they look due to the social distancing requirements. Some notable features are closed because of the pandemic, such as the Tommy Lasorda-inspired lounge, Shake Shack, and access to the players. However, the atmosphere did not feel too dissimilar to a normal regular-season game. The team stores operate at limited capacity with lines to greet you as you try to enter and a quasi bouncer keeping track of the number of guests in the stores and letting everyone in depending on the number. It is not too different from other retailers out there, such as malls and the stores in the Downtown Disney shopping district.

Concessions are where you notice the first major difference, and I haven’t even had the new Dodger Dog yet! The typical social distancing markers were in place and there was little-to-no intermingling between groups that you would typically see (I remember one game during the 2019 season where a couple from Tampa was explaining to us how much more they loved Dodger Stadium than Tropicana Field). The ordering process was more or less the same with the exception of no more cash payments being accepted. However, do remember to grab the condiments you will typically dress your hotdog with, as the communal condiments stands with the fun dispenser system have been closed. The newly installed picnic tables, spaced apart in order to keep parties socially distanced, are a fantastic place to enjoy your food. As for the new Dodger Dogs, I will simply show this picture of an actual hotdog that I was served with no further commentary. 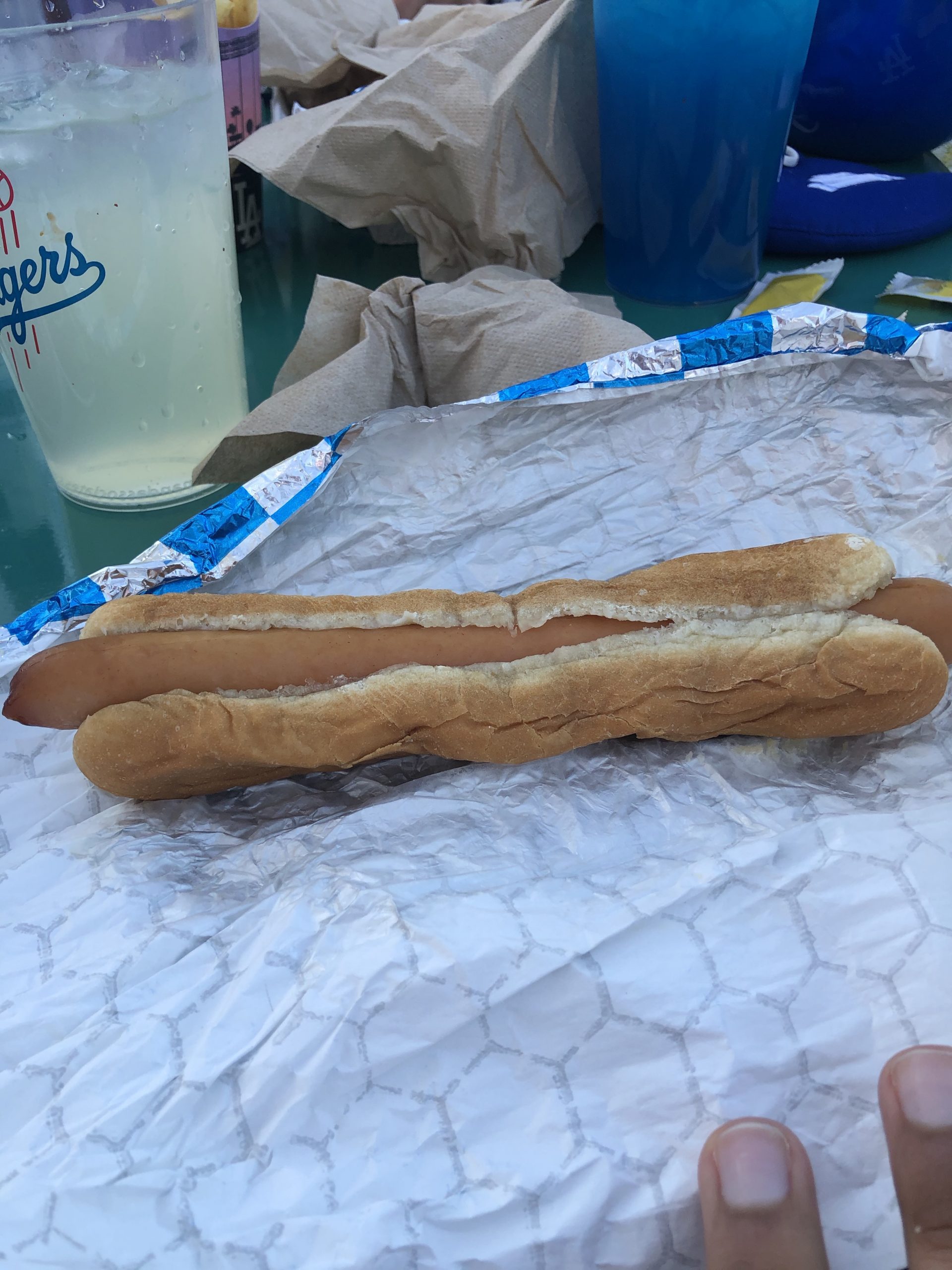 The most drastic difference can be felt when you take your seats. The stadium isn’t sold out a majority of the time, but there are still fans sitting in your general vicinity. With the limited capacity for the stadium, a majority of the seats have been zipped closed with entire rows completely blocked off from fans. However, there’s no denying the sense of familiarity that awaits you when you take your seats. You still have to wear your mask as a reminder of the ever-present danger that COVID-19 presents, but the applause that greeted Walker Buehler as he threw his first strike that wasn’t hit for a leadoff home run is comforting. The thrill you get from cheering on your pitcher during a two-strike count with two outs in the inning is still there. Even though you can’t high-five other fans, the excitement and shared sense of community that accompanies a home run is still exhilarating. Ultimately, going to a baseball game is not an essential activity, far from it. However, there’s no denying that whether your home park is Dodger Stadium, Wrigley Field, or even Tropicana Field, a night watching your team at the ballpark is soothing. It’s three to four hours where you don’t have to worry about that big report that’s due tomorrow in Econ or that you have a big presentation to the board at work on Friday. Your frustration and angst can be washed away by a good performance by your team or let out during a particularly frustrating half-inning. Despite all the social distancing, mask-wearing, and isolation your pod provides, that’s one that thing that can never be taken away. I said I would always cherish my first game back, and despite not being able to share my joy and frustration that I felt that night with the other 15,000+ fans in attendance, I do cherish being able to feel that soothing feeling that only a night at the ballpark can provide. Down the line, I hope I can share that feeling with 56,000 other fans, too.