Pitching might just be one of the most beautiful things in all of sports. The amount of thought, skill, and pure talent it requires is taken for granted by many fans, and we really should be applauding those who have found ways to sustain great performances. My contribution will be this piece, in which we look at Kevin Gausman, once an innings-eater for the lowly Orioles, and now an ace for the first-place San Francisco Giants. They have the best record in baseball at 57-32 as of July 15, and keep finding ways to win in lieu of injuries and lesser talent compared to other top-tier teams. A large reason for that is, well, Kevin Gausman.

Gausman sports an ERA of 1.73, one of the best marks in the whole league, and has the peripherals to back it up. His expected ERA is 2.84, FIP is 2.54, and his SIERA sits at 3.31 after the all-star break. He hasn’t let up more than three earned runs in a start since April 13, and can always almost be penciled in for six solid innings even while shouldering baseball’s fifth heaviest workload, totaling 114.2 innings over the first half.

How is he doing it? Whiffs and strikes. He has a career-best 32.6% Called Strike plus Whiff rate (CSW), which largely stems from his outstanding splitter. If I asked you to guess the second-best pitch in baseball this year, you’d likely guess Jacob Degrom’s slider or even Corbin Burnes’ cutter. But no, it’s Gausman’s splitter, which has a Run Value of -19 and a 0.148 wOBA against. He’s throwing it much more than last season, 37.6% of the time versus 27.7% of the time last year, and his usage rates have risen ever since he left Baltimore, seen below.

One interesting thing about his splitter is that he throws it against lefties more often than righties, likely due to the natural drop a splitter possesses. Furthermore, the pitch really tumbles on its own thanks to a spin rate of 1584 RPM. This feeds into an average 37.4 inches of drop, 5% above league average, and 12.4 inches rightwards of horizontal movement, 12% above league average.

For offspeed pitches such as changeups and splitters, lower raw spin is often more useful than the higher rates that we see with fastballs. The goal for Gausman here is deception, not to blow it by hitters. And he does that; his splitter holds a Whiff rate of 50.1% and a measly 0.129 xBA against! It’s always been his best pitch, but he’s taken it to a new level this season. He aids the aforementioned deception with a really tight release point, seen here: 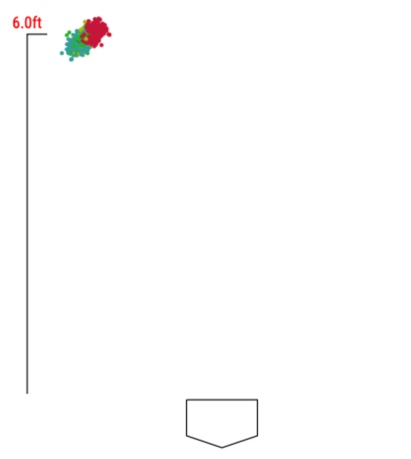 The red represents his fastball and the blue shows his splitter. Such a marginal difference like that is rarely picked up by hitters, and helps explain why they struggle so much against it. The two pitches play off each other really well, further seen in where he locates his fastball and splitter.

His splitter is concentrated in the bottom of the zone, tunneling out at the last second, whereas his fastball lives higher in the zone. This allows for that deception, in which the splitter looks like a fastball until it drops, and all of a sudden, Gausman racks up another whiff. Another aspect of success his splitter has contributed to is his prevention of home runs. He has the fourth-best HR/FB ratio at 7.5%, which certainly stems from his ability to keep the ball down in the zone, mainly with the splitter. I could go on and on about this fabulous pitch, but he isn’t a one-trick pony.

Gausman has evolved to become primarily a two-pitch pitcher. He’ll mix in a changeup and slider now and then, but the main pairing with his splitter is his fastball. As shown earlier, the two play off each other extremely well, and another factor contributing to this is Gausman’s active spin on the fastball. Active spin essentially tells you how much the raw spin is contributing to movement, and Gausman’s fastball sits at 98%, meaning it’s extremely efficient. It’s also neat to see that he has more than a few teammates who possess great active spin on their fastballs in Sammy Long, Scott Kazmir, John Brebbia, Jarlin Garcia, and Caleb Baragar. Perhaps San Francisco targets this trait in their pitchers by design.

Nonetheless, his fastball is one of the best, as it holds a -14 Run Value, tied for fourth-best among four-seamers in the league. It also gets a great amount of run on it, as it moves 50% more than the average fastball at similar speeds with a total break of 10.7 inches. The spin and movement help make up for the average velocity, 94.5 mph, and when put together, it leads to one of the best fastballs in the sport.

What To Expect In The Future

Is Gausman going to maintain an ERA of 1.73 over the course of the season? Likely not, but he won’t drastically regress. He’s shown fantastic stuff, and his ability to generate whiffs and chases won’t be going anywhere. He’s good now and he’ll continue to be good, hopefully for his sake, as he’s playing for a new contract.

One of the most important things about Gausman is his contract situation. Last offseason, many expected him to sign elsewhere, but he ended up accepting a qualifying offer from San Francisco that most didn’t expect to receive.

Now, this offseason Gausman can’t receive another qualifying offer. He’ll be in line for a large contract from someone. Even though he’s 30 years old, his arm is relatively fresh, having never eclipsed 200 innings in a season. His primary suitor should be the Giants, who are more familiar with him than anyone and have done a great job developing arms just like him. In my opinion, it makes more sense to ride it out with him than look for a replacement when he’s already budding into a top-ten pitcher. Either way, no matter the team, Gausman should be in line for a large deal if he sustains this type of performance. A four- or five-year deal with an average annual value of $25-27 million should be plausible for him, and teams will certainly pay up for a premium starting pitcher. Teams like the Yankees were linked to him last year, and expect them and others such as the Twins and Blue Jays to be in on him. In the end, though, I’d be shocked to see him leave San Francisco, where he’s jumpstarted his career. As long as he brings the splitter with him, he’ll be a must-watch for everyone, as he looks to continue this impressive run he’s put together over the first half.

All graphs and data are courtesy of Baseball Savant unless otherwise noted.

Heavily invested in sports analytics and a whole lot of other things. Yankees fan, Jazz Chisholm stan, and a statistical man. Follow me on Twitter: @ajaypatell8